Tim Chappell is not afraid of challenges. As a young man, he motorbiked around Brands Hatch. And later this month, the former GCHQ ‘spook’, naval officer and Dorset policeman is heading to Cape Town, bound for Perth in the Clipper Yacht Race.

Tim’s race departure date of 17th November is edging closer. He’s unsettlingly honest about his fears for the forthcoming round-the-world challenge – a 5,200 nautical mile journey in a 70ft racing yacht. “There could be a storm every three days and we expect up to force 10 winds, lots of sick people and bruised ribs. But it is a challenge. I could drown,” he says, in a matter-of-fact way. “People have died in the race before. They’ve had their necks broken or they have fallen over from the boat. A few years ago, a boat crashed into South Africa.” 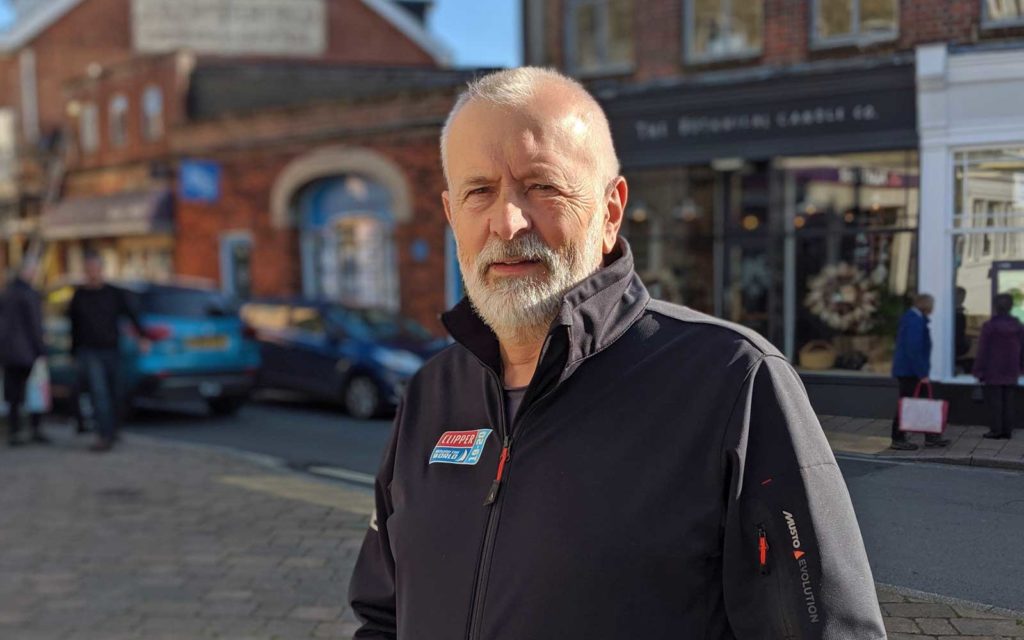 Tim hasn’t had a lot of previous sailing experience. “I had a dinghy on a lake in Kent when I lived down there for a while. I’ve not done any proper ocean racing, of such. I’ve done a little bit of Christmas and New Year yacht and flotilla stuff, as many people do in the Mediterranean,” he said.

You might describe Tim as a ‘driven’ person. “I’ve always done different things to everyone else. More people have climbed Mount Everest than have sailed around the world. Few people will put themselves in danger and risk, the way I am,” he tells me. “I’m not doing it to be big headed. I saw it on Facebook, and I liked it and without hesitation I signed up.”

Tim has picked himself up and got on with life, despite sizeable setbacks. He lost his life savings in an overseas investment recently. “I think I just want to colour my life. Too many people live in a grey world. I am challenging myself for confidence and self-belief, doing something different to other people,” he said.

At a time in life when many people want to take things easy, Tim is determined to push himself harder. Some friends have tried to talk him out it. “’You’re a geriatric’. ‘You are 71 two days after you start this race’,” said Tim, as he recalled some of his mates’ comments. But he doesn’t accept that this age is ‘geriatric’. “Not these days. True, I could be dead within the next two months or I could be around for 20 years. I just want to challenge myself once again,” Tim said.

He has assessed and rejected other extreme challenges, like climbing Kilimanjaro, as no longer suitable for him. “I think that at my age I definitely would not be able to go up into the death zone of altitude. My lungs would not take it. This does not require anything more than a bit of fitness, a bit of courage. I’m not a courageous person. I’m a daredevil I suppose.”

Tim doesn’t want to accept the stereotyping that can come with age. “I want to be as good as a 20-year-old. There are some 20-year-olds on the boat. I suppose I want to be young again,” he smiled.

I suggest that Tim could be as good as the younger crew in a different way, because he has life experience to draw upon. “Possibly, but it is still hard work. You use up 5,000 calories each day. People can expect to lose 10 or 20kg of weight through each leg of the race. But they will also build up some strength.”

There’s another factor driving Tim on this tough physical and mental challenge. Last December, he received a medical diagnosis that shocked him and has taken time to process. “I was watching a programme called ‘The Bridge’. My other half said to me, ‘You’re just like that detective, Soren Noren, doing what she wants, being outrageous and, at times, being against the grain. She is usually right, even though she gets into a lot of trouble’. That’s been the story of my life,” said Tim.

He found that he had the same condition as the Swedish police officer in the BBC4 series. Tim was diagnosed with Asperger’s Syndrome, part of the autism spectrum disorder range. “It explains why I was so good at working with GCHQ,” he said.

Tim says his children, who are aged 34 and 30, have always said he has been ‘a bit weird’. He describes his condition as a ‘disability’, but I suggest that he’s differently-abled. Tim paused to consider this, before agreeing and then again referring to his condition as a disability. “I have a particular knack because my disability allows me to recognise certain errors or advantages. I look at things laterally.”

He says this was evident during his recent Clipper Race practices. “During training, I would notice things that an experienced ocean sailor would not see. I would see sheets, lines or ropes that were going the wrong way around. My other attribute, as proved when I was in Dorset Police, is that I am very good in an extreme emergency situation. I am totally unemotional,” he said.

Some people who are on the spectrum can find noisy surroundings and a lack personal space to be uncomfortable. Tim says he won’t be fazed by the cramped conditions on the yacht. “In the Royal Navy, you were bunked in the same mess as 20 or 30 others and you had to work with lots of others. I have had the four-week analytical training, where you are thrown in with other people, and there have been no issues. I’ve been quite happy with it.”

Tim knows that there will be no luxuries on board. “There is no air conditioning and there is no heating. There are two toilets, but they have no seats. There is no shower. The kitchen is a single cooker with a couple of rings on top. You have to climb from one side of the boat to the other side on the inside, using rope ladders. It takes 10 to 15 minutes to get dressed in the mornings.”

Tim hopes that his friends and fellow Shaftesbury residents will support him as he raises cash for UNICEF, a charity which he is passionate about. “They are the only non-government organisation in the world that is permitted by every government. They go into Ebola virus areas and Yemen, which is dangerous because of the civil war. They’ll go into areas where they look after children and help them become responsible adults. UNICEF help them to look after their families, start farming the land and doing something useful, whether that’s making a windmill to access water or digging wells. UNICEF needs the support of everyone,” he said.

You can support Tim at his Just Giving page.

“Sir Robin Knox Johnson, who set up this challenge, said, ‘This is the race of your life. It will change you. It will develop your character. This race will sort out the men from the boys’,” said Tim.In attempting the gruelling Roaring Forties race, most people will agree that Tim’s bravery has set him apart from the boys and he’s more of a man than most.