Shaftesbury’s Hovis Loaf Is Back After Nesting Robin Delays Repairs

The Hovis loaf is back on display at the top of Gold Hill. On Wednesday evening, the restored and renovated fibreglass sculpture was driven up the cobbles in a van, before a group of four volunteers carefully manoeuvred the artwork into place opposite the Salt Cellar restaurant.

Ray Humphries says it’s home where it belongs. “It was outside the Town Hall for a period of time, but it started life on the hill and was here for over twenty years. It was primarily designed to go on the hill as part of the tourist attraction of Gold Hill and raise money for the cobbles. The hope is that we can raise money again, now it’s in a nice new condition. We’re trying to encourage people to have their photograph taken by the loaf and put a small donation in the internal money box.” 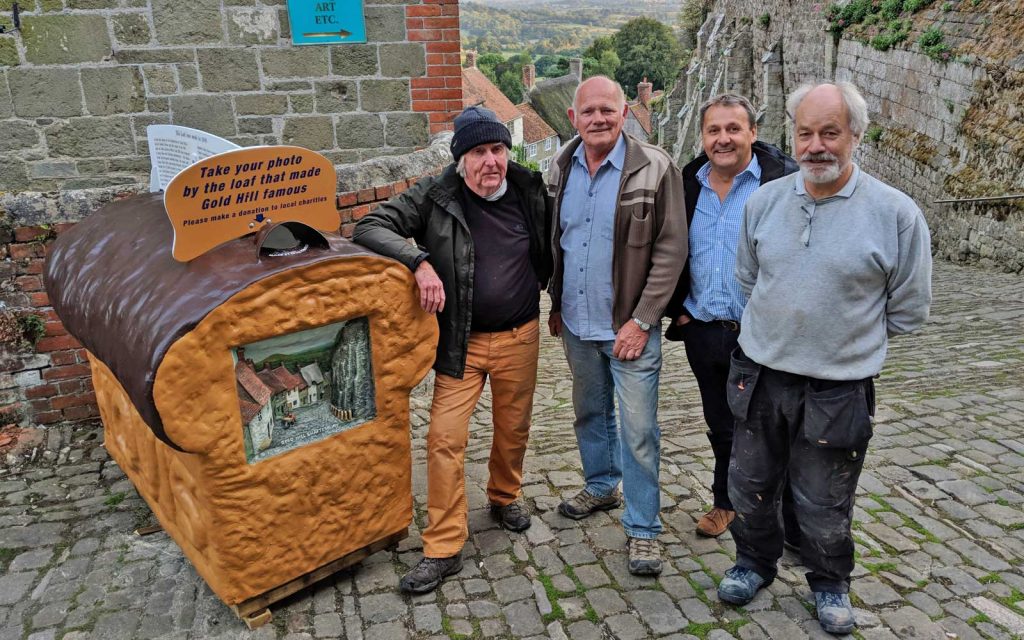 James Thrift is a trustee for the Shaftesbury Charitable Trust. “As far as I understand it, the money from the loaf has always been collected by the Trust and it is then given out to local charities throughout the year,” said James. He says that moving the loaf back from the front of the Town Hall to this prime position will generate more income for Shaftesbury’s good causes.

“The money dropped off a bit because it wasn’t as noticeable outside the Town Hall as it is here. It generates quite a few hundred pounds a year, which is all distributed to local charities and causes. The money stays here in Shaftesbury,” said James.

Peter Trigger is the craftsman who was originally asked to make the loaf, after locals began to notice the impact that the TV bread commercial was having on Shaftesbury tourism. “It featured a young lad pushing a trade bike up the hill, loaded with loaves of bread. The council and a local builder thought it would be an idea to make a loaf. They knew that I worked in plastics so they asked me to make one,” Peter said. 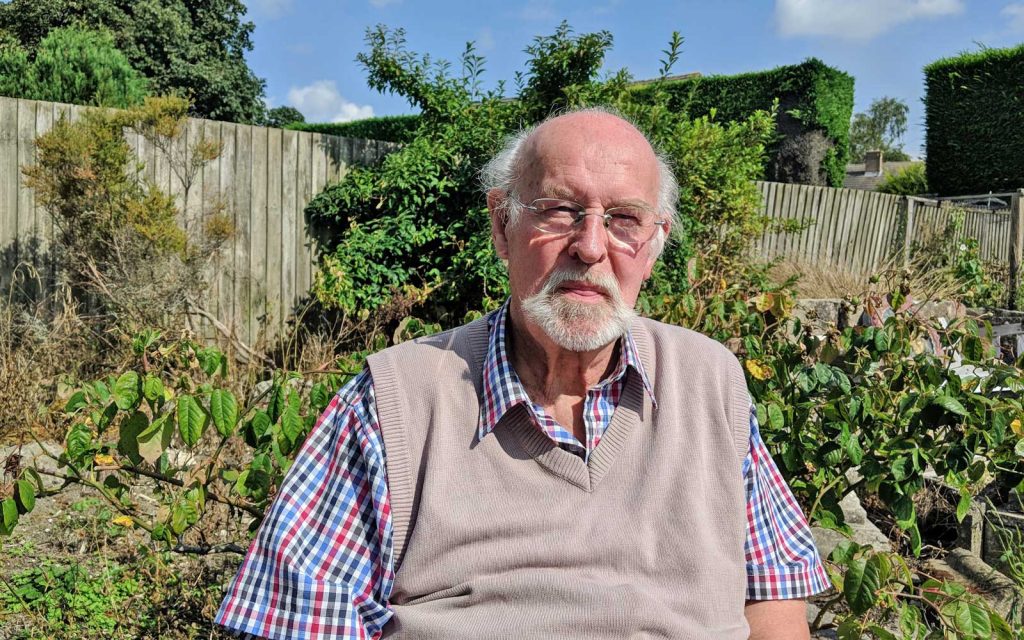 So, how long did it take Peter to create the sculpture? “Quite a while. Three weeks. I didn’t work on it all the time. I sculpted a picture of Gold Hill on the end of the loaf which took a little while to make.” That small, framed representation of the baker’s boy pushing the bike up the hill was restored by Shaftesbury artist Janet Swiss as part of this work. 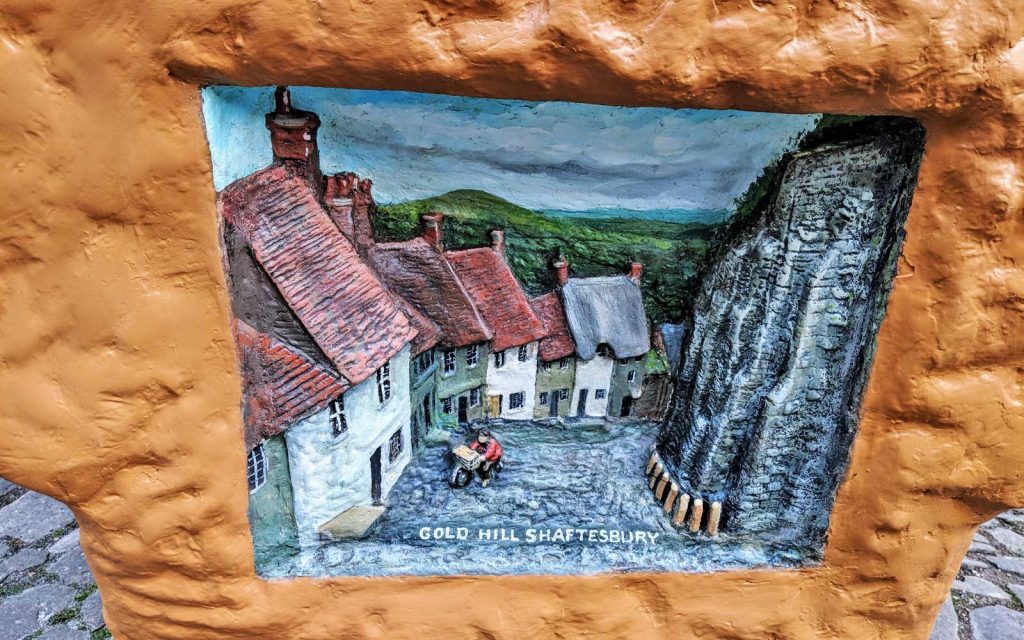 Peter didn’t expect his sculpture to survive the elements for so long without some form of restoration and this is the fourth time some work has been undertaken. “With the wear and tear over forty-odd years it needed a repair,” says Peter.

Tom Whiteford refurbished the loaf this time and he says it was a lengthy job. “Lots of filler, lots of rubbing down, lots of painting, lots more painting. We got there in the end though,” said Tom.

Peter is pleased with Tom’s work. “I’m glad it’s been repaired. I think it is a little bit of good for the town. People like having their photograph taken. Some have travelled from all over the world.” Ray hopes that selfie snaps with the loaf will promote Shaftesbury. “That will be brilliant if it does because it will be good for tourism and for the town. It will bring a lot more people to see the loaf and Shaftesbury,” said Ray. There’s information on the loaf, explaining the significance of the sculpture for overseas visitors or for those too young to remember Ridley Scott’s 1973 ad. 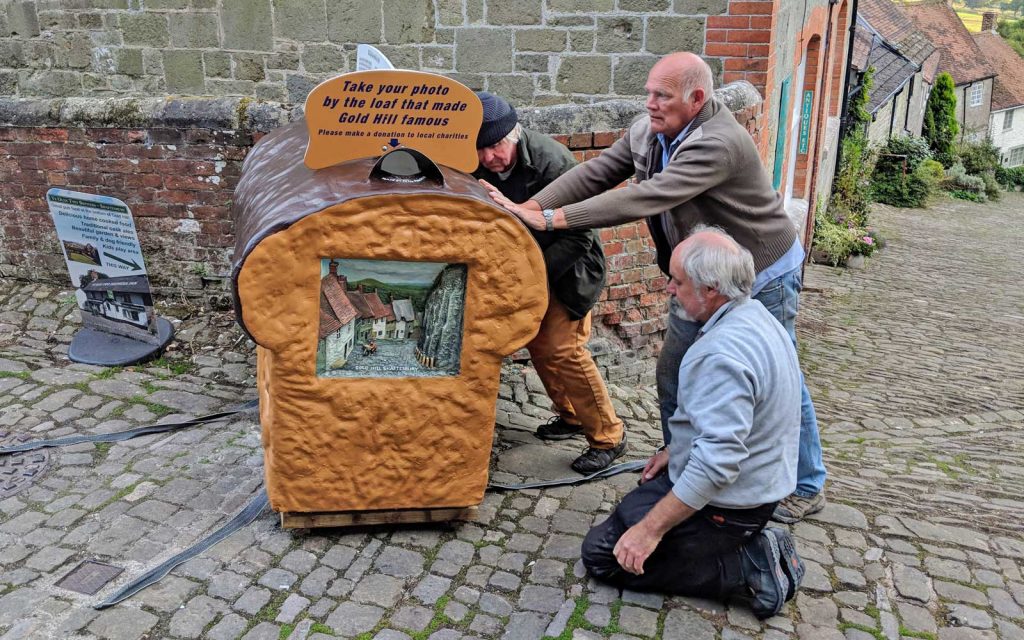 There have been all sorts of rumours and suggestions explaining why the loaf has been absent for so long. Rob Neeley explained that the repairs were delayed because the loaf had a temporary lodger!

“We were held up by the bird’s nest and that knocked us back three months. We couldn’t kick the bird out. That would have been very cruel,” said Rob. “Ray and Tom are very kind men. They wouldn’t do that.” When the robin left the roost, the restoration could continue.

“They were nested in the hole where you put the money in. We were held up a little bit because there were eggs in there, so we had to wait for those to hatch before we could do anything,” said Tom.

But Peter says that pranksters have dragged the loaf down Gold Hill before. “It was pushed downhill one weekend, so they had to bring it back up again. It’s quite solid. It went down well.”

Peter will be guest of honour at Saturday’s ceremony to unveil the restored loaf. Quite rightly too – Shaftesbury owes him a great deal. Soon after Peter moved to the town from Windsor, the talents of this self-taught artist and sculptor were quickly recognised. His first job was marking up vehicles. “I did some vans for a local garage. I sign wrote them and it just went from there”

Computer technology has changed the way in which a vehicle is liveried. “Signwriting has now been taken over by transfers. Old signs and old vehicles still need a signwriter for lining and signwriting. It’s a gifted talent,” said Peter. He has undertaken thousands of projects for businesses and community organisations in and around Shaftesbury over the years.

One of his most impressive pieces is the painted 3D sculpture decorating the interior walls of the Trinity Centre. “I had a free range and I thought I’d do the four seasons. It’s all in bas-relief from the wall,” said Peter. He created a powerful depiction of ‘St George and the Dragon’ set against an apocalyptic nuclear holocaust backdrop. “I think it connected with the dragon and evil,” he said.

Sadly, not all of Peter’s art that once decorated the Trinity Church remains. “They had to make a hole through one of the paintings to extend into another room.” But Peter didn’t mind his work being demolished. “I got the satisfaction of doing the painting. And I hope that other people enjoyed it too.”

Peter served with the Horse Artillery and he says there’s one Shaftesbury client he has been most proud to make signs for – The Royal British Legion. “I’m quite pleased with those,” said Peter, before he explained that he was once a standard-bearer for the organisation. “Not any more, though” he added. “The legs don’t seem to carry me that far now.”

As he approaches his 89th birthday, Peter is still drawing and signmaking. “I’ve never retired. I just kept going as long as I can,” he said, as he rolled up his garage door to reveal his current projects in process.

On Saturday at 11am, Peter will join invited dignitaries who will admire both his work and Tom’s restoration of the loaf, which commemorates the commercial that put Shaftesbury on the map. “They made a good job of it I think.” And just for the record, Peter is still waiting for a free loaf from Hovis. “I’m waiting for that to come,” he laughed.