On Saturday 26th January, Sally and Andy Francis will ‘call time’ at Ye Olde Two Brewers for the final time.The couple are leaving the St James Street pub to take on the management of Angola ’76 on Mustons Lane.

Keri Jones from ThisIsAlfred.com spoke with Sally and heard how both the challenges facing the pub trade and the prospect of an exciting opportunity have guided the couple’s decision to leave.

Sally was in a reflective mood when I asked her about her time at ‘The Brewers’. “Five years is a long time in a pub. It’s a lot of summers, a lot of Gold Hill Fairs and a lot of Christmases. I really think we have given it our best shot and I would rather go out on a high,” she said.

Sally knows Shaftesbury well. She spent her formative years, between the ages of 3 and 19, in the town before her career took her away to Center Parcs at Longleat, London and onto the warmer climes of Dubai and Qatar.

“I had run pubs for people before but being a manager is completely different to putting your own savings into something and running your own business. We came back from the Middle East and unfortunately my mother-in-law was terminally ill so we returned to look after her near Marlow in Buckinghamshire,” explained Sally. “My father mentioned that ‘The Brewers’ was up for tenancy so we came to have a look. It was different to how I imagined it as a child but it has always been a fantastic pub. I remember it being great when I was younger and a real community pub. We looked at it and decided to go for it.”

Sally said that Andy quickly fell in love with the stunning countryside around Shaftesbury. And the couple knew that the town would be the perfect place to bring up their daughter. “Our little girl, Elizabeth, was three at the time and it was great for her after growing up in the Middle East to be surrounded by the countryside. She could put her wellies on and go for a run around. It’s a real community pub and it’s just on the road from the Abbey School where Elizabeth goes.”

Sally says she’s enjoyed running The Brewers, a pub that’s played an important part in many people’s lives. “When you run a pub you see so many wonderful, happy times but also sad occasions. We’ve had christenings, weddings and wakes. I hope to think that we have made an impact in the community and helped a lot of people. It’s a community pub. That’s what we’re here for,” said Sally.

Sally reeled off a list of special occasions she’s helped to arrange and which she has fond memories of. They included the wedding of some close friends and her parents’ 50th wedding anniversary. And there have been some memorable, silly events, too. “We’ve done Easter egg hunts in the garden with staff dressed up as bunnies and jumping around. There have been so many good times.” 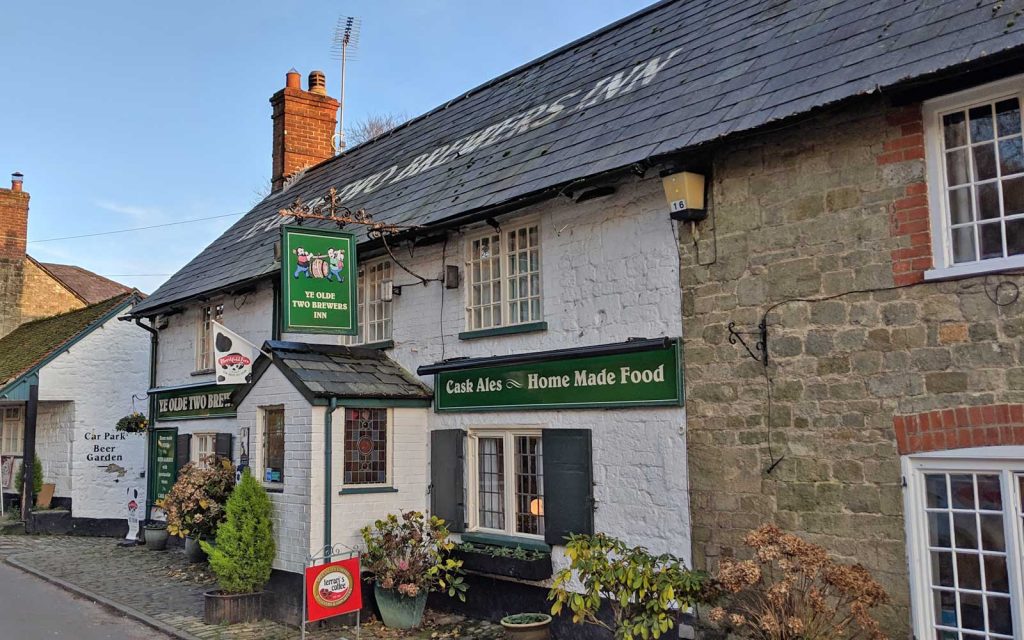 Sally says she is pleased that she has been able to encourage and develop some of her younger staff. “One of the most amazing things is to see the youngsters coming on board from the age of 16 and seeing them flourish and their confidence grow from working with the public. Then they go off to uni as amazing, grown-up people,” said Sally.

So why are the couple leaving? It seems that factors outside their direct control have prompted their decision. The changing attitude to pubs, the economy and increased costs have taken their toll. “Over the last two years there’s been a significant change in business,” Sally said. “It can be really busy at the weekends but we struggle at lunchtimes. Our location can be the best in the summer but the worst in the winter because people don’t want to come down the hill.”

And Sally has a stark warning for pubgoers across North Dorset. “Popping in ‘here and there’ is not enough to keep them going. I would say that if people want their pubs to stay alive they have to support them.”

Sally has noticed that pubs seem to play a lesser role in some customers’ lives compared with five years ago. “A lot of people stay at home now. If people have families and young children they drink at home, even though we are family-friendly here. Many people socialise at home. Brexit is having an impact, too. People are worried about spending money.”

And while there’s less money going into pub tills, there’s more of a squeeze being put on landlords’ livelihoods. “Our business rates pretty much doubled last year. The utility bills are going up and up. It’s become harder to manage. There needs to be some leeway. Either your rent has to come down on money has to come from somewhere,” said Sally.

Sally couldn’t get the rent reduced. She said that the chain that owns the pub wanted to take too much from a new lease arrangement. “We requested changes but eventually we couldn’t come up with a deal that was workable for us to move forward. That’s not saying that it won’t be different for the next people coming in.”

So Sally and Andy are leaving to manage Angola ‘76 for its owner, John Morgan. That bar will retain its quirky ‘jungle’ image, with the netting over the outdoor space. And the music will remain an important part of Angola 76’s offering. “John has created a grassroots music venue. What we’re going to do is put in a fantastic operating bar with really good cocktails. It’ll be nothing like Shaftesbury has seen in terms of a professionally run cocktail bar,” said Sally. “Andy and I have both got a cocktail bar background. We’re going to get the guys enjoying making the drinks and putting some fun and drama into it as well. It’ll be a proper cocktail bar but the icing on the cake will be all the music and entertainment that’s provided as well.”

Sally and Andy will also extend the menu. “We’re going to put forward really good food options where people can come with large parties for birthdays and celebrations. It’ll be slightly unusual food that you can’t really get in Shaftesbury, the sort you’d have to go to bigger towns for,” explained Sally. “We will have burgers, chicken wings and Tex-Mex style food like fajitas. There will be some Portuguese food that represents Angola too, including tapas. We’re looking to do some exciting dishes and make it a cool destination place for people to go.”

John will continue to search for and book talented bands and performers for the venue. “He is very much still going to be a massive part of organising the music. It is his forte. That’s what he really loves to do. With John and his creativity and our hospitality experience I think it’s a really good combination and it’ll be a really good team,” said Sally.

After Sally and Andy leave The Brewers, the pub will be closed for a few weeks while the new owners settle in. Sally is pleased that it will remain open, at a time when so many inns are closing. “The pub is very fortunately being passed on to another couple who are excited to take it on. They have some fresh ideas and I think they are going to be hugely successful and I hope they will be massively supported.”

As the end of Andy and Sally’s time at The Brewers approaches, Sally has mixed emotions. “I think that whenever you leave anywhere where you have lived and had family events, you feel something. I’m really happy that the pub is going to some really lovely people. I am handing it to safe hands, which makes me feel better because I would hate not knowing what was going to happen. With all the hard work that we’ve put in, I’d hate it to go downhill. I really don’t think it will.”

Andy and Sally are looking forward to their new life ‘uphill’. Sally wants to remain involved with the community and welcomes all of her regulars from St James when Angola ’76 reopens on 7th February.