For seven years, all eyes were on Lieutenant-General David Leakey at the state opening of Parliament. David was Black Rod, the officer who traditionally bangs on the House of Commons door during the ceremony. David offers an insight into life at the heart of Parliament later this month as a fundraiser for The Soldiers’ Charity.

Alfred heard about his unique experiences.

Imagine going to work every day for years, but few of your co-workers know your real name, just your job title. That was David Leakey’s experience when he took up his high-profile parliamentary position. “To give it its full title, ‘Gentleman Usher of the Black Rod’. There were a lot of people in in the Houses of Parliament who never really knew my name. I just was Black Rod,” said David. 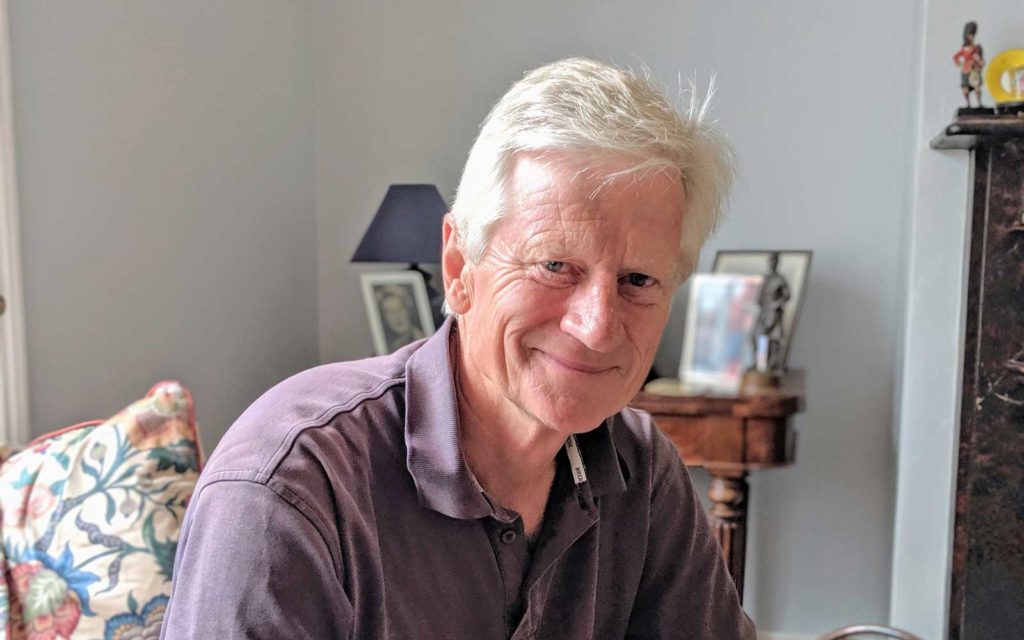 As you might imagine, this is a procedure steeped in tradition. It might seem whimsical, but the action is highly significant. Parliament, during the reign of Charles I, was very keen to emphasise its political independence of the Crown. Charles I tried to get into the Commons chamber to arrest four members of Parliament on a charge of treason. When he got to the door, the Speaker ruled that the sovereign would not be admitted to the chamber, because he had no business to be in it.

“The House of Commons needed to exercise its independence of the sovereign in making political decisions. They didn’t admit Charles I,” said David. Ever since, this theatrical occasion has been performed. “The Queen never goes to the House of Commons chamber. Instead, when she wants the MPs to listen to the Queen’s speech, she sends her messenger Black Rod. The House of Commons want to make the point that even the Queen’s messenger is not freely admitted – he has to ask to come. The convention is that he is never refused,” said David, adding that there have been a few exceptions. “Once, when he arrived early and without the rod, the Commons was very displeased and told him to come back later.”

The role of Black Rod can be traced back even further. “Black Rod started about 1350 and mostly had a role around the Order of the Garter, mainly at Windsor Castle,” said David, who had to dress in a particular way for the State Opening of Parliament. “Silk stockings, breeches and patent leather pumps with a diamanté buckle on them. It is part of the well-known and much cherished tradition of our country.”

The actual rod has symbolic importance, too. “The gold lion on the end of the rod is the symbol of the sovereign. When you take up the appointment of Black Rod, you have a private audience with the Queen. She gives you the rod and you’re receiving, with it, the sovereign’s authority to act in her name.”

And David says the way you use the rod is important. “It needs to be properly done. If the knocks are indistinct, then Black Rod would be criticised for a pathetic knock. It has to be loud and clear. The convention is that you knock three times,” he explained.

David enjoyed a distinguished military career. He commanded the Second Royal Tank Regiment and the 20th Armoured Brigade. He served as UK military representative at the peace negotiations to end the Bosnian conflict. His career also included time as the commander of European Union peacekeeping forces and Director-General of the European Union military staff in Brussels. David retired from the military in 2010.

“If you have a full career as an officer, certainly in the army, in your mid-50s it’s, ‘thank you very much and goodbye’, because the army is a young man’s sport. The role of Black Road is an advertised public appointment. You submit your application. If you’re lucky, the House of Lords recommends you to the Queen. If she approves, she appoints you.”

David’s wife noticed the newspaper advert. My wife found me working at home to be ‘too much’ and she saw the advert and said, ‘Why don’t you go and get a proper job. So I applied,” said David.

The job is certainly ‘proper’ and significantly more weighty than theatrical ceremonial duty. “The role covered some specific responsibilities for security, business resilience, business continuity, emergency response, disaster recovery, incident management and the ceremonies and traditions, not just of the House of Lords, but both Houses of Parliament. You orchestrate, coordinate and rehearse the state opening. You have to have had some experience in the political complexity of our country,” said David.

Christopher Price invited David to talk about his experiences to help raise funds for The Soldiers’ Charity, which used to be known as the Army Benevolent Fund. Christopher serves on the Dorset county committee. “Our committee looks at what we can do in Dorset to raise money for the ABF. Last year, we raised £51,000, and £30,000 was from our major event in Dorchester, ‘Art for Army’, where we sold a range of pictures.”

Christopher says the charity operates globally. “Last year, 70,000 individuals were assisted by the ABF in 68 different countries.” He is proud that of the 160,000 charities registered in this country, The Soldiers’ Charity, the ABF, is within the top 100. 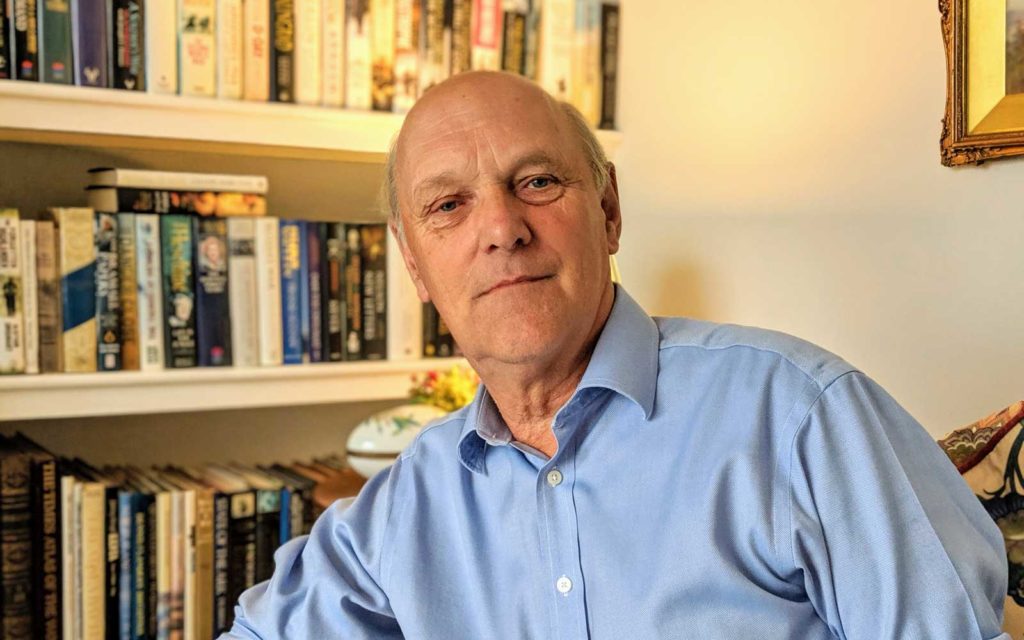 Christopher says people do recognise the importance of their work. “It was set up to help soldiers, veterans and their families in times of need. If a soldier has a relative abroad who is ill or is dying and they have no funds to get there, we could arrange for flights and tickets quite quickly. If it’s more complex, like trying to help the soldier’s house in terms of mobility, we work closely with the Soldiers, Sailors, Airmen and Families Association. They analyse what that individual or family need, then the case for funding goes forward,” said Christopher.

Anybody buying a £17.50 ticket for David’s 6.45pm talk on 18th September, called ‘Behind The Scenes at the Palace of Westminster’ will raise cash for this good cause. “He is most amusing and very knowledgeable. If anybody feels they would like to go there’s plenty of opportunity to get a ticket,” said Christopher.

As David reflects on his seven years working in Parliament, he thinks people should be more appreciative of the ‘fantastic job’ undertaken by the House of Lords. I was astonished when I talked to a lot of MPs, how ignorant they were of the role that the House of Lords played, not just in holding the government to account, but the extent to which they influenced, amended and improved legislation,” said David.

“A member of the Lords can claim £300 a day as their allowance for attending. They get paid no salary. They don’t get paid for staff or researchers. If a member attended every possible sitting day of the house, the most that they would make in a year would be around £40,000. If you don’t know anything about a subject, go into the House of Lord’s Hansard records, which are open to the public online. You will find debates on every subject and you will read speeches by people who really know about these things. You’ll have all sides of the argument presented in the most articulate way by some of the most eminent people in this country.”

David has spoken at a number of Soldiers’ Charity fundraising events around the region recently. His most frequently asked question has been, ‘What is the Speaker of The Commons like?’ “My relationship with Mr Bercow was a little bit inconsistent, if I can put it that way. I found him rather mercurial in nature. I liked him actually. He’s an interesting person, very bright, very well read very, quick on his feet and very articulate,” said David.

If you want to hear more of David’s opinion on John Bercow – and he has more to say – or Black Rod’s role, book your ticket for the Royal Chase Hotel event.