19-year-old Andrew White is taking a gap year. But he’s not planning to trek in Costa Rica or visit Cambodia. He’s going to spend 2019 perfecting his stand-up comedy.

Andrew has been busy writing and performing since his Shaftesbury Fringe show this summer. And the Wimborne-based comedian says he’s starting a Shaftesbury comedy club. Andrew spoke with ThisIsAlfred’s Keri Jones.

It’s perhaps unfair to put a stand-up comedian on the spot and ask for an example of their work but Andrew didn’t mind repeating one of the first gags he wrote. “I consider myself to be a political comedian. Not so much that I comment on politics. It’s just that I promise to be funny, then I don’t deliver.”

Since Shaftesbury Fringe, Andrew has added many more one-liners and stories to his repertoire. He’s been busy performing in venues across the country. “After Shaftesbury, I took the show up to Edinburgh, which was a full-on month of performing everyday,” said Andrew. “You just become a much better performer. It’s like going to the gym every day. Your comedy muscles just get better. Since then I’ve been getting back into the rhythm of the comedy circuit. I’ve had gigs in London and around the South West.” 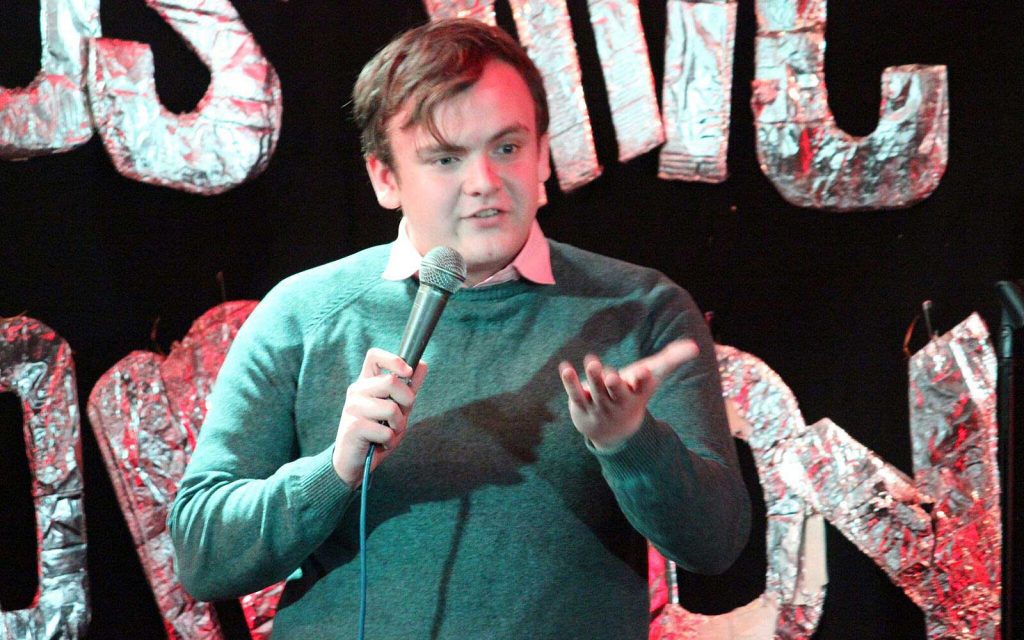 It’s not fair to pigeonhole a performer. Andrew says he’s been inspired by many different sorts of comedians – from storytellers to comics – that fire out one-liners. “It’s slightly observational. There’s a bit of storytelling. Part of that is because there have been so many comedy influences in my life. There’s a bit of something for everyone. If you don’t like the stories, you like the one-liners. If you don’t like the one-liners, you like the stories,” he said.

Andrew says he admires the American comedian Patton Oswalt. “He is not very well-known over here, but he has a storytelling style that I absolutely love. It’s really descriptive, beautiful writing with punch-lines that flow. It’s not an obvious punch-line.”

Andrew says he’s also adopted the upbeat stage presence of Michael McIntyre. “On British TV, Michael McIntyre was always on. He’s naturally become quite a big influence. I am quite high-energy and optimistic. I’m a bit tongue in cheek, too,”

He’s had some good reviews since he performed at Shaftesbury Fringe, including one from entertainment guide, The List. They described Andrew as ‘an unexpected success’. “I don’t know what they were expecting, but I will take it,” Andrew said.

Andrew says his material is family-friendly but don’t assume that, because of his age, it’s all aimed at teenagers. “The comedy is broad enough for every generation,” he said. And he has lots of new material for his new show. “It’s quite good writing comedy because it’s not something you necessarily have to sit down and write. You can make notes on the fly. If I had to sit down and physically write everything out, I probably would not be disciplined enough,” Andrew said.

Andrew has approached Shaftesbury Arts Centre to pitch a regular comedy night. He’s had good experiences performing to audiences in our town. “I love doing the Fringe. I love the people in Shaftesbury. They are really upfront, laugh and they are really supportive of the arts. But Shaftesbury is a blind spot in the comedy circuit. The nearest club is Wimborne, which is a very good club but it’s a bit too far for some people to travel. I wanted to get something more local and bring comedy to the people rather than people having to trawl up to London,” Andrew said.

He’s promising a changing mix of four or five comedians each time the comedy night is held. “It will be a rotating line-up. I will host every time but otherwise there will be different headliners, different middle acts and different people to come and open it every time. There will be quite a wide variety of styles and experience. There will be a few people who have done really well on the comedy circuit and some newer local acts who are starting to break through.”

Andrew isn’t doing this to get rich. He says he just likes sharing laughter. “Tickets are only £10. That will cover the cost of the room in the Arts Centre. I’ll be able to give some money to the acts, so it will be worth their time coming down. I am not too fussed about making money personally. I just love doing comedy and I love to bring it local to me.”

Andrew says acts are happy to travel to North Dorset because audience interaction here is different from city venues. “Areas like this are so much more receptive and open-minded and willing to have a good night, particularly compared to London. Because there is so much on in London, if you don’t enjoy what you are watching you just leave and go somewhere else. There’s always something on. Crowds are a lot less attentive. They are not willing to go with people and hear them out. Places like Shaftesbury and Wimborne and these little areas in the Southwest are better places for comedy because people are nicer and they have a better sense of humour.”

Andrew has been keen to praise the Shaftesbury Arts Centre’s volunteers for their support. “I approached them but they were so receptive and keen for the idea that they have been a massive help. I have been with venues before that are not as willing to help out. It becomes a bit of a battle rather than a cooperative event,” he said.

If you want to book ahead, Andrew has already chosen dates for his first Shaftesbury Arts Centre comedy nights. You can buy tickets at their Bell Street box office or through their website. “The first one is Friday 18th January. Then Saturday 30th March. The next one will be 24th May, which is a Friday. There’ll be a break for Shaftesbury Fringe and the Edinburgh Fringe and I’ll see what happens next autumn and winter. I’m coming back to do Shaftesbury Fringe, I love it.”