ThisIsAlfred spoke with Margaret and John Cluett about their experience of playing around our area, overseas and with folk music royalty.

It was a mutual love of folk music that brought John and Margaret Cluett together. “We met on the circuit,” said John. “I used to play with a chap, well known around here, Gordon Baxter. He is sadly gone now. Gordon was working with Margaret in the same company. He told her that she needed a good man. I was him!” John laughed.

“I was running a folk club in Tisbury and John was coming to the folk club in Shaftesbury, which used to be at The Fountain Inn,” Margaret said. “And our folk club visited Shaftesbury Folk Club and that’s where I saw John and Gordon. Gordon said ‘this is the chap you need to meet. He the best melodeon player in Dorset’,” said Margaret. 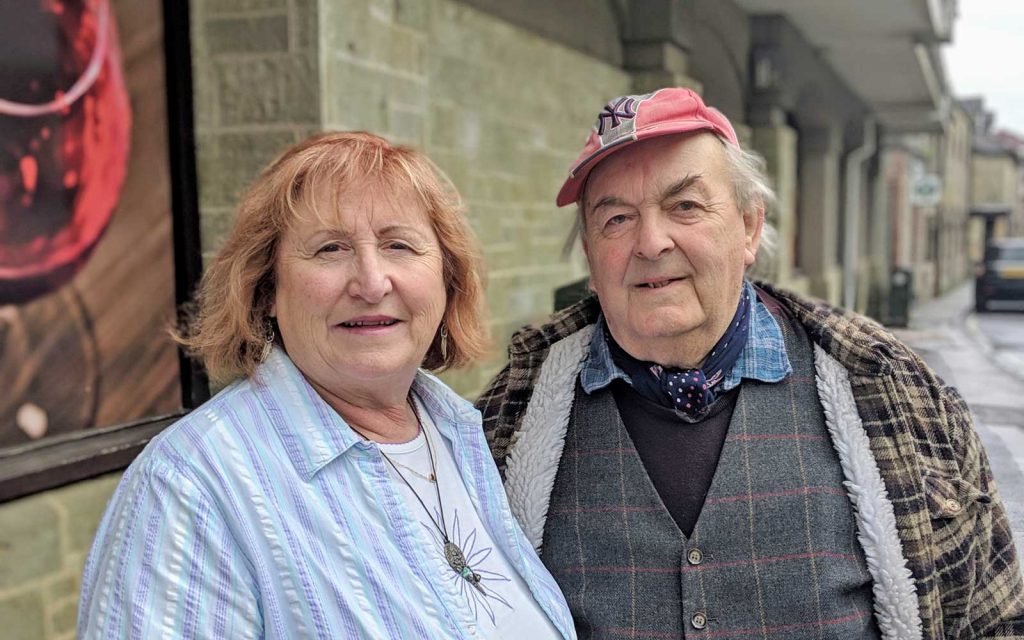 The couple play a wide variety of folk and John enjoys playing the traditional music he grew up with. “I do one or two Dorset tunes, like the Dorset Four Hand Reel and the Dorset Stick Dance. Obviously you have to do Linden Lea, haven’t you?” said John. “Soldier’s Joy was a tune that Thomas Hardy used to play on his one string fiddle and John plays that too,” added Margaret.

In fact John is well versed in facts about the Dorset author’s musical credentials. “His grandparents and parents, they used to play in the gallery in churches before organs were invented,” said John. “Hardy incorporated this in one of his stories about how the choir and musicians got drunk in the service. The vicar kicked them out and had an organ installed. They always say that was his family, but whether a lot is true or not, I don’t know.”

During their relationship, the Cluetts have grown to appreciate each other’s different folk music tastes so the pair have created a broad repertoire. “John’s tradition is very much jolly, pub, knees-up Irish stuff. Mine was kind of more serious, folky ballads. But I’ve now learned to play all that sort of thing because people don’t really want to hear a sad ballad in a pub. They want something jolly usually, don’t they?” said Margaret.

“Our little band, we do everything from traditional to contemporary. A bit of Tom Petty, a bit of Fleetwood Mac, a bit of Irish, Scottish,” Margaret continued. But John says that they interpret those names in their own way and they don’t perform carbon copy cover versions. “You can’t do that with the instruments we have got. We have only got a melodeon and a guitar, sometimes a fiddle, sometimes electric bass, sometimes a drummer, so we have really got to do our own thing,” said John.

The pair has extensive experience of performing in a variety of spaces, from pubs to Park Walk. “I’ve always busked there. Sometimes people will come along and will play with me,” John said. They have also taken Dorset folk music across to The States and to the high seas. “We’ve played on a train going across America and we’ve played on a cruise ship,” said John.

Margaret seems particularly proud at having performed with one of the biggest names in folk music, Steeleye Span’s vocalist. “I used to try and get up to Maddy Pryor’s house, up on the Scottish border, because she does singing and music workshops. I’m such a fan of hers. It was a privilege to go up there and sing with her. And on the last night we had a bit of a session. John was thrilled to get up and play with Maddy and her ex-husband Rick, who was bass player with Steeleye Span.”

The pair are also proud of the legendary folk sessions in Shaftesbury, which attracted the crowds to the Crown Inn. “We always say that we started the Fringe here really. We used to have a session down in The Crown in the High Street in the early days of Gold Hill Fair. There would be thirty or forty musicians,” John said, as he reminisced about the Shaftesbury High Street pub that closed in 2011.

“We used to play on the patio at the back from eleven in the morning until midnight,” John continued. “The landlord used to make a big vat of stew and we would have a break at six o’clock for that and then go and play again. People from all over the South came,” he said.

“I expect that we packed that up twelve years ago,” recalled John, in his deep and rich Dorset accent. “Ted Cropper was the landlord at the time. When the first Gold Hill Fair came up, we played in the archway and the same happened the next year. And he said ‘I don’t want you playing in the archway. You’re stopping people coming into the door’. He had a patio up at the back, so we used to go out there to play and if it rained, we used to go inside the pub. It was not a very big pub,” recalled John.

“We used to get musicians to come from Andover and Basingstoke. People used to come up from Exeter way and Plymouth. The Morris musicians used to come in and perform,” John said.

Those Gold Hill Fair weekend gigs brought some memorable moments. “There was one group that came in called Spanks The Plank. They did Appalachian dancing. This chap would dance on a board about two-foot square. And they had banjos and fiddles and lord knows what else. He was a tall and wiry land. His legs looked like they were made of rubber. They were all over the place,” said John. “It is a bit like the clog dancing that they do up north, with feet flying in all directions, that kind of thing,” added Margaret.

The landlord’s excitable Jack Russell Terrier also made a lasting impression on John. “She was a devil,” he exclaimed. “She grabbed the bottom of my trouser legs, and she wouldn’t let go,” he laughed, as he remembered the chaotic scene.

“We wish that we recorded some of those sessions because we had some great music there. We only realise now how good it was,” said Margaret.

In recent years, folk music has shaken off its ‘old man’ image through the many music festivals we enjoy around Dorset, Wiltshire and Somerset. And Margaret is pleased that the genre is attracting a younger following. “I like to do a lot of Bob Dylan songs. And it surprised me, seeing Dylan at the BIC in Bournemouth, that there were people as young 17 and 18 there. He’s part of my youth but certain things like that continue forever. It’s good that people like Seth Lakeman are bringing folk back to the young people again,” said Margaret.

And while their Fringe show should appeal to folk-lovers young and old, the couple is pleased that the next generation of their family will join them for their hour-long gig. “Our granddaughter is going to join us on the fiddle. She’s studying music at Guildford,” said Margaret.

Tattie Bogle will play against the beautiful backdrop of the Blackmore Vale in the BUPA Dentists garden at 2.45pm on July 6th.

At 86 years of age, John reckons he is the second-oldest performer at Shaftesbury Fringe, behind 93-year-old singer Tony Hawkins. The couple hope that if all goes well, their Fringe folk event could become the stuff of legends in future years, just like the old days at The Crown. “This is the first time we’ve done it, so let’s see what happens. I think it could be good,” said Margaret.