ThisIsAlfred’s Keri Jones took the 10-minute stroll from St James’ Church, down Foyle’s Hill, to meet Sarah Junor and Alex Gibbs at Edwards Farm. The pair explained their vision for a series of pop-up events mixing music and meals in the meadowland setting.

Sarah’s eye lit up when I asked her to talk about Edwards Farm. It’s her home and her place of business. She runs a massage therapy practice here, and she loves the location. “It’s a magical place. You wander around the thirty acres of fields and it just has an energy. There’s one particular field, which slopes up to the left. At the end are three trees and if you walk up there, turnaround and look back, it’s one of those amazing views. You look down on the little cottage and feel that you belong here,” Sarah said. 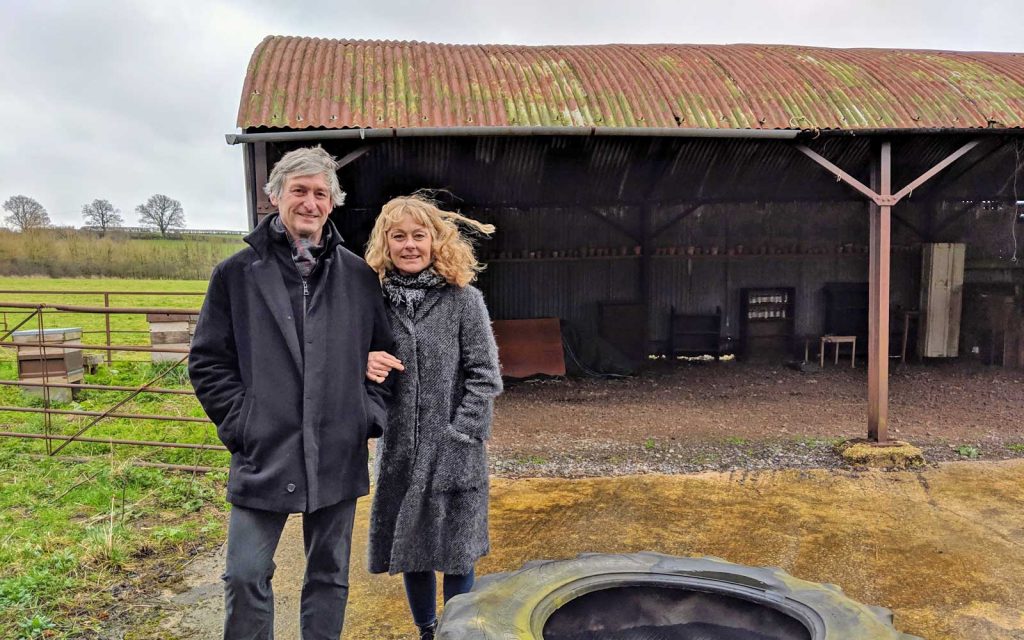 Sarah Junor and Alex Gibbs outside the barn

As a four-year resident of Edwards Farm, Sarah is convinced of this site’s potential for performance. “All the years that I have lived here I’ve just felt that it is underused,” she said. “It’s a farm that has not been worked for many years. The treatment rooms are popular but I have had this grand plan of glamping and also some events going on.”

We were standing in a small courtyard, secured by a five-bar farm gate. A dilapidated breezeblock agricultural building stood on the opposite side of the concrete hardstanding. This yard was edged with remnants of the farm’s agricultural past – stacks of pallets, large tractor tyres and piles of terracotta roof tiles.

The main barn, the venue for pop-up performances, stood on the left on the space. It was a corrugated iron structure, about 40 feet long, its roof curving upwards like a wartime Nissen hut. The barn was open to the elements on one of its four sides and had seen better days. The floor was rough – grit and dirt. It’s an interesting place to put on functions. 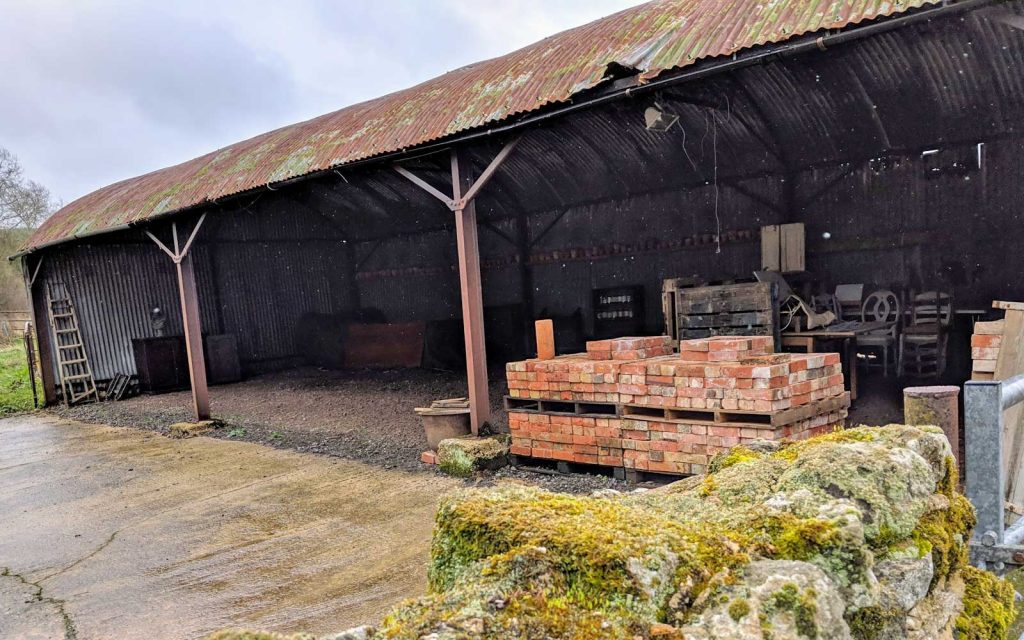 Inside the barn were some decorative touches that you would not expect in a redundant cattle shed. There was a bar, formed from repurposed wood. “Dil built our bar,” Sarah explained. Dil is a member of this gang of four event planners. His bar has been creatively fashioned out of a door, planks, pallets and what looked like an orange crate. It stood at right angles to the corrugated iron barn wall.

At the opposite end of the barn a wooden cabinet was displaying a stone bust of a Roman emperor. “Caesar watches over the events,” joked Sarah. “We have decided he is part of the fixtures and fittings. I think he has to be here for each one. He had lots of fairy lights on him at Christmas. I am not quite sure what will happen to him for the next event. We don’t want anybody who came along last time to think that they know what to expect. I am sure that Caesar will have a new look.” 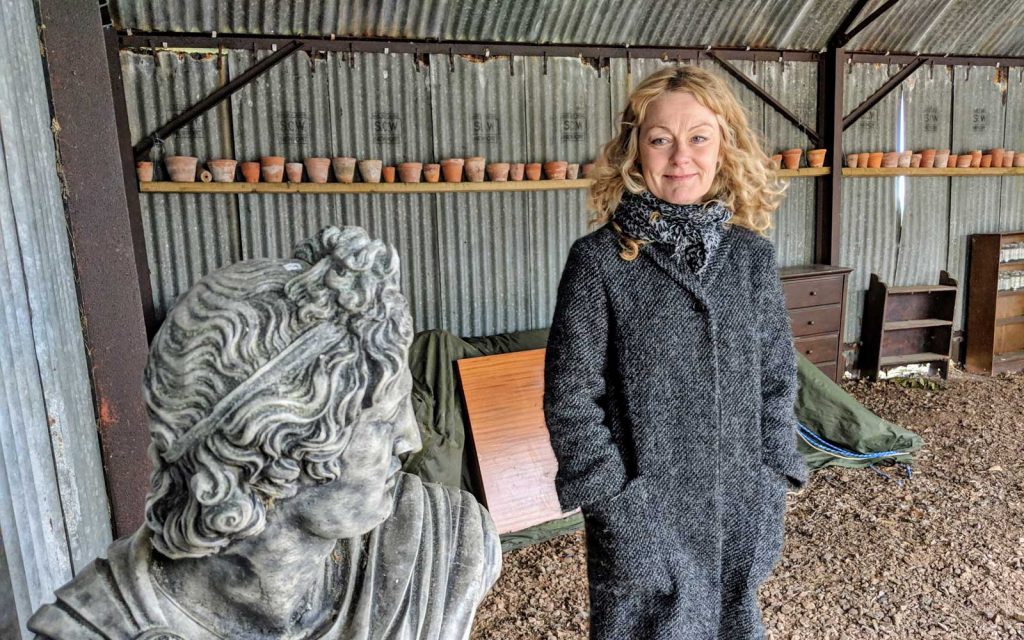 The team have an event planned at the end of this month. Sarah was about to tell me about it when Alex Gibbs joined us. Alex, an osteopath, works on site too, and the farm has been in his family for decades. “I wasn’t brought up here,” he said. “My grandparents had the farm from just after the First World War. My grandfather came back from the war, thankfully, and he took the tenancy for a while, He bought it in around 1940. It was a little, classic, Hardy-style dairy in the Blackmore Vale. He milked the cows here until he was 85, almost until he died. It was a very small farm, but that’s how it was in those days.”

Alex doesn’t farm himself, but he has inherited some of the family’s farming skill. “I keep some sheep – a flock of Dorset Down. We had the best of breed award at the Royal Bath and West and we won the South West novice flock competition,” Alex said, with pride.

“Those lovely sheep of Alex’s, that won best of breed – we ate them at the last event,” laughed Sarah. “We did,” confirmed Alex. “I think it’s so important that we keep everything local. That’s the way forward and we have such fantastic food in Dorset, you don’t have to go very far,” he said.

Food will be an important part of the Edwards Farm pop-up event experience, along with entertainment. “What I love is the slightly cabaret-style. It’s so nice to see a performance with dinner,” said Alex.

“Our chef is Emma Wellman,” said Sarah. “She is a housekeeper for a ‘horsey’ family in Hinton St Mary. She is a very good chef and I think she just decided she fancied doing something different, so she climbed on board and then there were four of us. We had to then decide what we were going to do and that’s when we arrived at the barn.”

Alex has some experience of event organising. He’d planned and put on a Jubilee party in Buckhorn Weston. “We did a big event for the Queen’s Jubilee in our village, for 500 people,” said Alex. And since then he’s developed his skills. “We did something called Club 111 at Cadbury Court, which is in Somerset. I do enjoy seeing young performers and up-and-coming performers. My son was involved in that a little bit and he took his show to Edinburgh. We put on an event with four or five different acts with dinner included. It was a formal affair there. We’re planning more informal events here,” Alex explained.

The Edwards Farm team is hoping to host frequent pop-up performances with food in the future. “Maybe we’ll have a comedian. Perhaps we’ll have a performer. Who knows what we will have down here? I would love to do all sorts of stuff,” said Alex.

So is this going to be the town’s new performance space? “I think we’re getting a bit excited here, said Alex. He paused before adding, “Yeah, why not? Let’s give it a go and see what happens.” The four have already trialled a pop-up at the farm in December. Shaftesbury and Tisbury singing trio, Belle Street, headlined. “I think everybody enjoyed it,” said Alex. 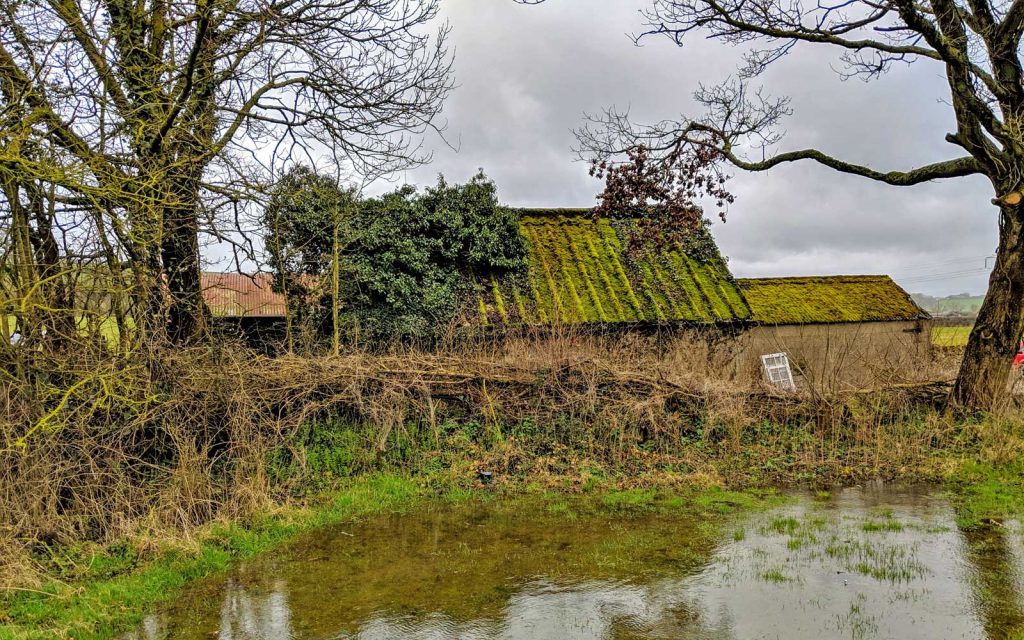 Sarah said the team learned an important lesson – always exude confidence. The weather was not good and Dil had to deal with water pouring down from the canopies they had erected to keep guests dry. “It’s a bit like cabin crew. When you are on a plane and you see the crew during turbulence, they all seem to be going about their business. When they look nervous, you look nervous,” said Sarah. “Dil had a big scaffolding pole and he kept pushing it up against the canopy. Lots of rain came pouring off the end during the evening, when everybody was having dinner. Nobody paid any attention to him whatsoever because we seemed to have it under control.”

The next event, on 30th March, will follow a theme. “Given that it is the night of the clock change and the heralding of spring and, dare I say it, we might have possibly left the European Union the day before, we thought we’d celebrate that things have changed. Whether it happens on the 29th or not, we’re all fed up with talking about it, so let’s just celebrate change,” Sarah said, skilfully avoided using the word ‘Brexit’.

“We decided to extend to forty people on 30th March. We had thirty people last time. We don’t want to overdo it. But, maybe in the summer, when we can spill out into the outdoor space and not be completely under the barn then, who knows?” Sarah said.

Local band ‘Sorry About Shaun’ will be performing on the 30th. Geoff Coward, owner of GG’s Barbers in Shaftesbury, is the band’s lead vocalist. He’s running the London Marathon and we featured his charity mission on ThisIsAlfred recently. Sarah is also entered into the 26-mile challenge.

There are future events in the pipeline. “In May, we might like to do a pub night with an open mic and that will encourage some different talent. It’ll be slightly affiliated with Shaftesbury Fringe. We’re a little bit too far out of Shaftesbury to be a Fringe venue, but we have talked about some artists camping and possibly ticketed private events at the end of the day,” Sarah said.

Edwards Farm is three quarters of a mile down the very steep Foyle Hill from St James’s Church. This remote location brings benefits and some challenges. There are few neighbours, so loud music isn’t the problem that it could be in town. Getting to the farm takes coordination and planning, if you’re not driving because you’re intending to have an alcoholic drink. “It was surprising that many people walked back into Shaftesbury afterwards last time. I know it is uphill and Foyle Hill is a challenge, but many of the cars we had were left behind.”

Sarah says the events will be aimed at locals, but whoever wants to come can attend. “It is a ticketed event. It’s first-come, first-served,” she said.

Both Sarah and Alex think they’d the found a special place that’s perfect for unique and interesting occasions. “There are so few places to go and have some fun around Shaftesbury and locally. This is a gathering point where people can come together and, instead of having their own dinner parties, they can have several dinner parties under one roof,” said Sarah, adding, “Ultimately, I have grand plans. I want a field kitchen but one step at a time. The food has to be cooked off-site and brought here but Emma is an exceptional cook and she did an amazing job last time.”

Before I headed off, Alex asked whether anyone could throw light on his family farm’s name. Who were the Edwards? Or who was Edward? Alex isn’t sure whether the name is a christian name or surname. “My father grew up here and he doesn’t know. Recently, a patient of mine could not find the way here and he stopped a guy who was walking up the road. He asked the way to Edwards Farm and the man responded with, ‘I’ve been walking up and down here for fifty years and there’s no Edwards Farm around here’.” said Alex.

“We have set a challenge on our website,” added Sarah. “We want our guests to see if they can come up with a story for us. We had a suggestion at the last event that Edward was a Lithuanian refugee but it didn’t really cut the mustard,” she said. “It was quite a good story though,” interjected Alex. “He had got drunk at the Two Brewers and decided to roll down Foyle Hill in a barrel and he had crashed into the gateway of the farm and died. And his name was Edward. The farm was named after him. It was very dramatic and we like the originality but it wasn’t the story we were looking for,” said Sarah.

So if you can provide answers, tell the pair at their next pop-up on 30th March. You can book tickets for ‘Love Change’ at ClubOneEleven.co.uk.