A new Gold Hill Museum exhibition tells the story of three members of a Shaftesbury family who all achieved their own levels of fame, fortune or infamy in the New World.

Ray Simpson has researched the Upjohn family and their connections with an Australian outlaw, a global drugs giants and iconic American architecture. “The Upjohns had been in Shaftesbury since about the 1600s. I think originally they were a Welsh family,” said Ray.

William Upjohn was born in 1770. He was the oldest of the three family members featured in the museum display. William worked as a surveyor and produced a detailed map of Shaftesbury. “That was in 1799. It was the first comprehensive map for about 150 years and we have copies here in the museum,” said Ray, adding that very little had changed on the plan. The town centre street pattern is clearly recognisable. 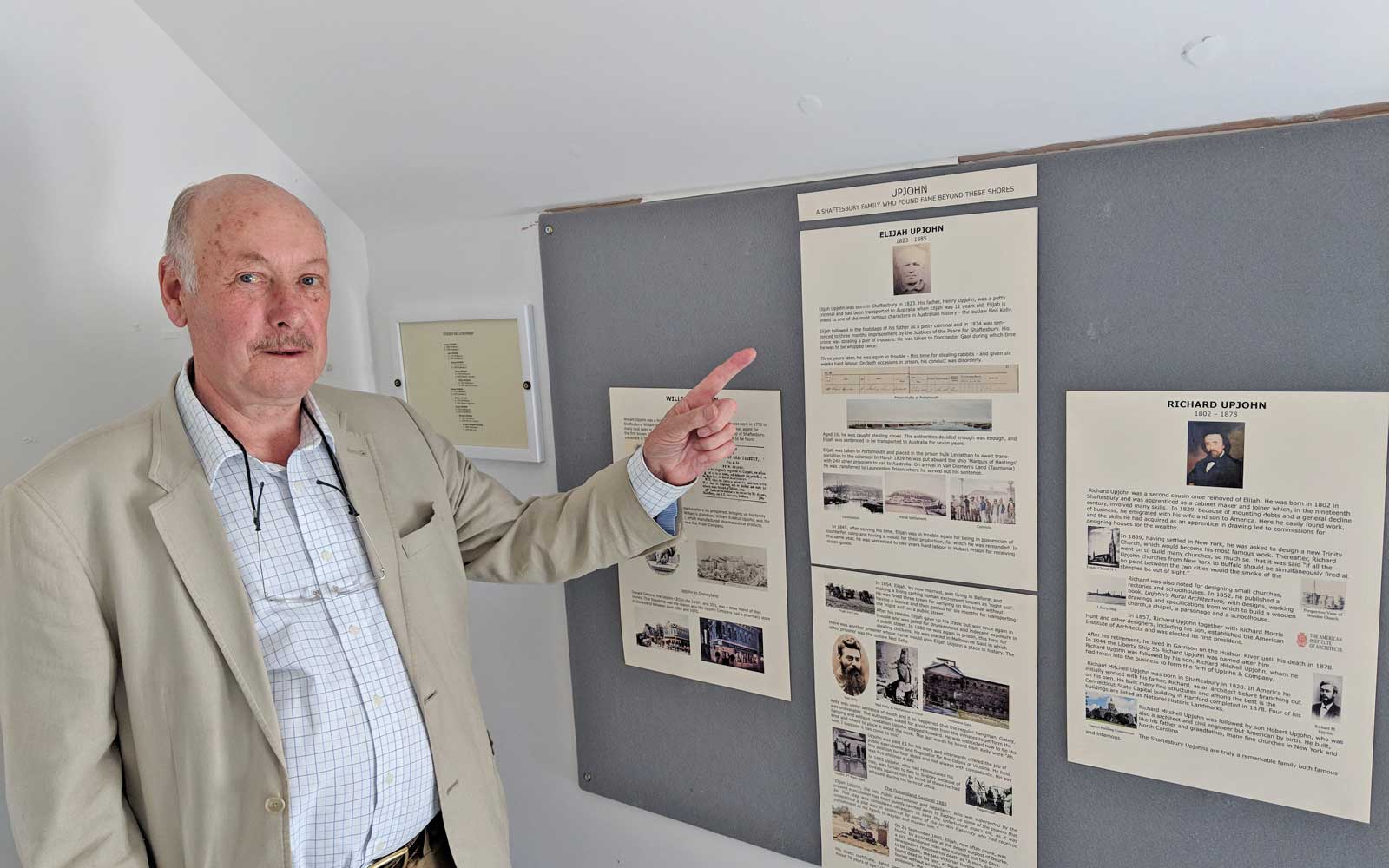 “He was an estate agent, or a land agent as they were then known,” said Ray. “I am not sure how he got into the business. He conducted most of the property sales in and around Shaftesbury. He lived in Salisbury Street in Cann House.”

In 1830, William emigrated to the United States but Ray isn’t sure whether William moved there in order to seek his fortune. “It’s hard to say. I think he was probably well set up. He didn’t have to go. His son did emigrate and probably painted America as a land of opportunity.”

Several of William’s family members pursued medical careers and his grandson, another William, founded a pharmaceutical company known as the Upjohn Company. “His cousins and brothers were chemists who founded what was to become the world’s largest pharmaceutical company. It still exists now, but not under the Upjohn name. Through a series of mergers over the years it is now the Pfizer company,” Ray said.

Richard Upjohn was born in 1802 in Shaftesbury and worked as an apprentice cabinetmaker. When business fell off he also moved to America and soon began designing homes for the wealthy. “He wasn’t really an architect by training but he ended up doing that. He designed and built some of the most famous churches, which still exist. The largest one, Trinity Church, is quite a landmark in New York,” said Ray.

In 1857, Richard Upjohn established the American Institute of Architects and served as its first president. Richard Upjohn’s son, also called Richard, was born in Shaftesbury in 1828 and he followed in his father’s footsteps as an architect. Four of his buildings are registered as national historic landmarks in the United States.

But it was Elijah Upjohn who had the most colourful life. Much of his time was spent behind bars. Ray says that his branch of the family tree would have had a bad reputation in town. “It was probably well-known in Shaftesbury. Steer clear of them. They came from one common ancestor but, like all families, you split and lose touch,” Ray said. 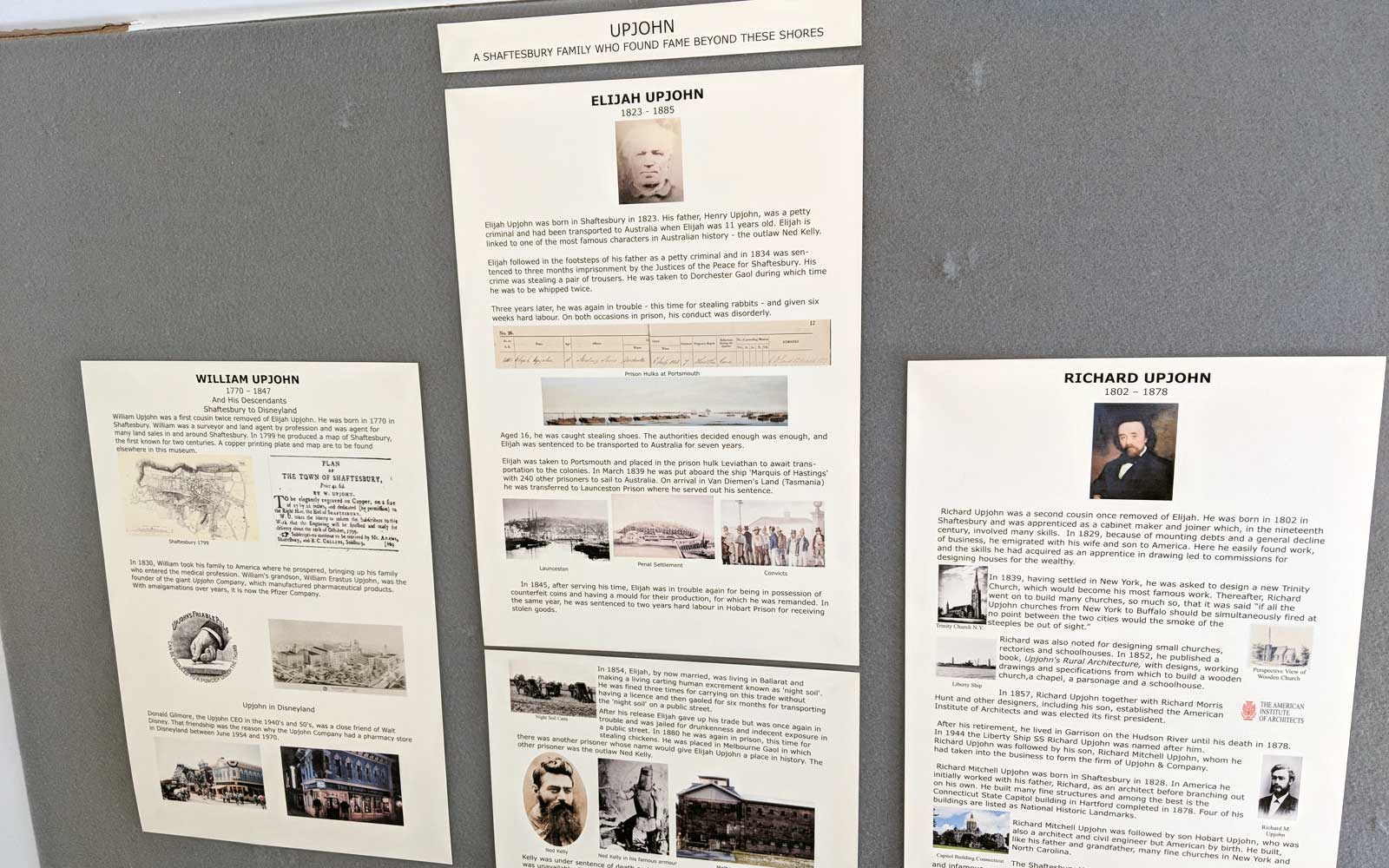 Elijah was born in Shaftesbury in 1823 but Ray says we don’t know the exact location. “It’s sometimes very difficult to work out where ordinary people were born.” Elijah was jailed in Dorchester for stealing trousers and as his thieving continued, the 16-year-old ended up being sent down under.

“Elijah was a petty criminal, stealing shoes and rabbits. Eventually the authorities had had enough and said that he qualified for a free holiday in Australia,” Ray laughed. “In fact he followed his father who was also a petty criminal, although a gardener by profession. He was deported to Australia before Elijah. Elijah was a persistent criminal.”

When he was freed, Elijah was jailed again in connection with manufacturing counterfeit coins and later, in 1854, he served six months after authorities discovered he didn’t have a licence for his business of carting human excrement.

“The night soil,” exclaimed Ray. “It accumulated in towns where they didn’t have any flushing toilets. It happened in this country as well. People came around with a cart and took it down to the tip. It was quite a good job to him. The only drawback was that he did it without a licence.”

It was incredible that at the other side of the world, there was still the British sense of bureaucracy. “Absolutely,” agreed Ray. “We were talking about the middle of the 19th century. One mirrored the other to a great extent.”

Elijah was jailed again in 1880 in Melbourne where he gained some notoriety through his connection with a famous Australian gang leader and police murderer who had received the death penalty. “He ended up in the same prison as Ned Kelly, in Melbourne Gaol. The regular hangman of the time was not available so the prison authorities asked whether any of the prisoners wanted to take on the hangman’s role. Elijah put himself forward and was given a modicum of training on how to hang someone and that’s what he did.”

Ray has sourced images of the Upjohn’s and you can see them upstairs in the museum as part of the exhibition. The display includes Elijah’s prison picture. Ray decided to research the Upjohn family story when he was looking for interesting characters with a Shaftesbury connection.

“I was really looking around for a subject. It’s hard to touch on Shaftesbury people of note. I suppose there are the Rutters and there is a book coming out about John Rutter later this year,” Ray added. “But Elijah is such a character, I thought he would appeal to the Australian tourists we get.” Ray says some visitors from Australia have already commented on the display linking Elijah with Ned Kelly.

You can view the Upjohn exhibition at Gold Hill Museum throughout the rest of the summer and autumn, until the museum closes for the season in October.