A £100,000 Upgrade To Shaftesbury Arts Centre Started This Morning

Work began on the first phase of an overall £1millon package of Shaftesbury Arts Centre enhancements, today (Monday). Chairman Jenny Parker told Alfred’s Keri Jones how this initial stage of the project should improve facilities for local groups and visiting artists when it is completed in the autumn.

Richard Neale and Jenny Parker were standing in the corridor that leads away from the Arts Centre foyer, staring at a wall-mounted plan of the new dance studio.

Loud banging noises from upstairs and the sound of sheets of plastic dust-covers being torn apart instantly informed anyone browsing the adjacent gallery that major works were underway. “They’re preparing the upstairs room to become a really lovely dance studio,” said Jenny.

Richard Neale is an Architectural Assistant with Proctor, Watts, Cole and Rutter Architects and Town Planners in Shaftesbury. “I’ve been helping the Arts Centre with the planning application, building regulations and getting their current project onto the site for creating their new dance studio,” said Richard.

You might think that creating a dance studio would be a rare project, but Richard has worked on similar schemes before. “I’ve done some work with schools in the past, with a previous practice I was working for,” he explained.

Jenny says that this dust and a bit of disruption will be worth it for the end result. “We’re going to raise the roof up. There will be lovely windows with lots of light coming in. We’re going to put in a superior sprung dance floor. First, they’ve got to put in a proper floor, which is going to take all the weight. On top of that, there’s going to be a sprung layer and on top of that, there will be a vinyl, all-purpose layer for tap and all sorts of dancing.”

Jenny says that the special floor is required for safety reasons. “For dancers, a floor has to be sprung, because they can injure themselves otherwise.” When work is complete, the room will be mainly devoted to dance although Jenny says some keep fit, Pilates and yoga classes will also take place there.

New dance studios have opened elsewhere in Shaftesbury recently. Nevertheless, Jenny is convinced that there are enough potential users for this new Arts Centre space. “Definitely, because lots of our shows have dancing in them. The dancers have to practice somewhere. Often, they practice on carpet or on floors that bounce up and down, which make a lot of noise underneath. We can definitely do with that space,” Jenny said.

Architects offer more than just layout plans. Richard explained that he had spent time considering the noise reduction aspects of the scheme. “We are looking at improving the acoustic isolation between this room and all of the others, so that we don’t get too much noise coming from dancers,” said Richard.

Thirty people dancing could obviously create a disturbance to people below, on the ground floor, especially if the downstairs session was a quieter event, such as a poetry reading. “It also works the other way. With the Arts Centre’s varied range of activities, if there’s a toddler group in an adjoining room, they tend to be quite noisy. A quieter dance recital or even a yoga group wouldn’t want noise coming through in the opposite direction either,” Richard continued.

Jenny says that when the new dance studio opens, both the Arts Centre’s own groups and external users will be able to book the room. “We often get travelling shows, where they want rehearsal space. We can hire it out to all sorts of people,” said Jenny.

Jenny is clear that room will be for rehearsal rather than performance. “It won’t be big enough for that. It’s primarily for practice,” said Jenny.

There is a lot more work proposed for Shaftesbury Arts Centre but Jenny says it was a strategic decision to proceed with this first stage now, rather than wait to secure funds for the complete programme of works. That’s because the Arts Centre’s planning permission will soon expire. “If we don’t start something, we’re going to lose our planning permission and we can’t afford to do that. We might never get it again.” 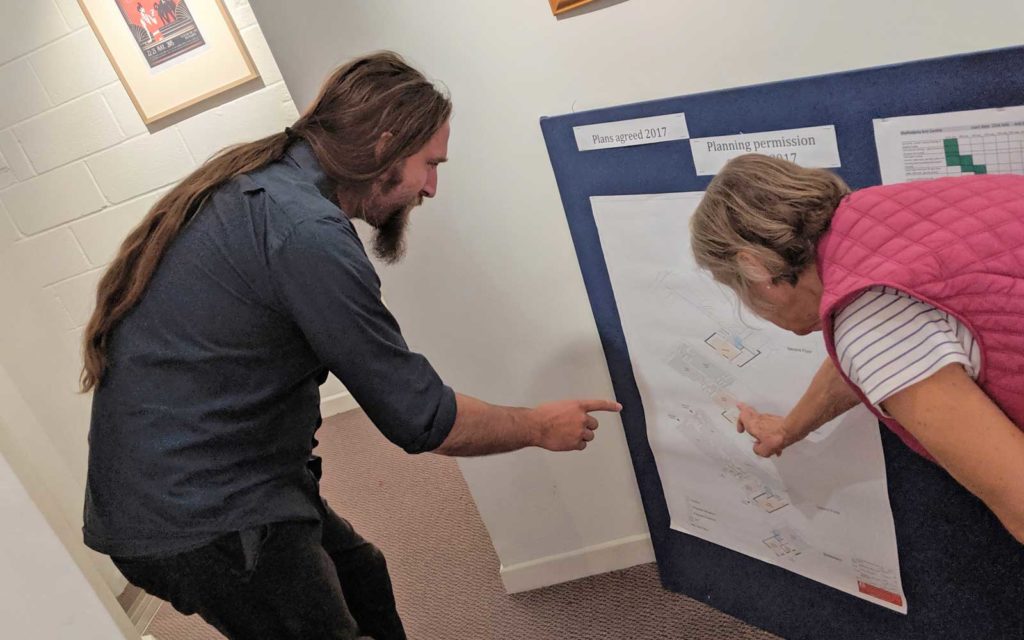 Jenny and Richard inspect the plans

Jenny says that the future stages of the project will create workshops. “A stage workshop, level with the stage, and a costume workshop underneath it,” she said.

The Arts Centre, which is a registered charity, already has enough funds for the dance studio works. “It’s going to cost just over £100,000 for this first phase.” The entire Arts Centre improvement was originally presented as a £1million scheme and Jenny doesn’t know whether the costs will have now risen beyond that sum. “It could possibly go over. You can never tell with buildings like this, can you? We will have spent quite a lot of our money, but we still have a small nest egg left, which we must build on. We have a big programme of fundraising activities coming up. It would be wonderful to be able to do the next two stages in one go. We’re getting small grants. Shaftesbury Town Council has been very supportive and given us a grant awards towards a lift,” she said.  But Jenny says an approach to a major arts grant-funding body has not yet brought results. “We’re looking for half a million (pounds).”

As is often the case with building projects, there have been some unexpected developments now the contractors have started on site. “Unfortunately, the floor is not safe. And they’ve got to take the floor out between that and the room downstairs,” said Jenny. “We didn’t think we were going to have to replace the floor. This is going to cost us a lot more money than we originally hoped for. The floor has hit us in the pocket,” she added.

The Arts Centre’s listed building status and the alterations made to the structure over the decades add further complication to this project. Richard says he’s mindful of the Arts Centre’s limited resources and he’s keen to prevent any unexpected extra bills. “Good communication with contractors helps. We’re constantly evolving designs and precise techniques for how we’re going to be constructing particular elements, so that we can avoid any unnecessary costs and make sure everyone is happy and comfortable with what they’re doing. We’re certainly aware that it’s the blood, sweat and tears of all the volunteers and members of the Arts Centre who are raising the funds for it,” said Richard.

Despite all of the activity inside, people passing by along Bell Street might be unaware that these works are underway. The work has been scheduled for a quieter time in the Arts Centre calendar. “August is a time when we normally close down. We have got no shows now until September. From the front, it really doesn’t look as if anything’s happening,” said Jenny, but if the work all goes to plan, the first phase to create a dance studio should be completed by the autumn. “We have a date of early October, which we are desperately hoping they will be able to finish by,” Jenny said.

If you happen to have a few pounds, or even better £500,000 that you don’t need, Jenny would be keen to relieve you of your spare cash. Call in to the Arts Centre if you can make a donation.