A group of Buddhist monks is in Shaftesbury this week. And they’re inviting you to learn about their beliefs, their traditions and to view them creating beautiful art.

The men are visiting from the Tashi Lhunpo Monastery in India, which was established when their order was exiled from Tibet in 1959. “The tours are designed to spread the word about the monastery and also the incredible culture that is sacred Tibet,” said David Holme, a trustee of the Salisbury–based charity that supports Tashi Lhunpo.

David says that the monks will be based in Gold Hill Museum until lunchtime on Monday 2nd July.

A group from the monastery visits the UK every year, usually for three months at a time, although this year the monks will be touring for four months. After Shaftesbury Fringe they’ll head north of the border to the Edinburgh Fringe and they’ll remain in Britain until October.

“The tours have been going for the last 16 or 17 years and they have been growing in popularity. We usually bring a team of eight over. We bring seven monks who visited previously and integrate one new member,” said David. 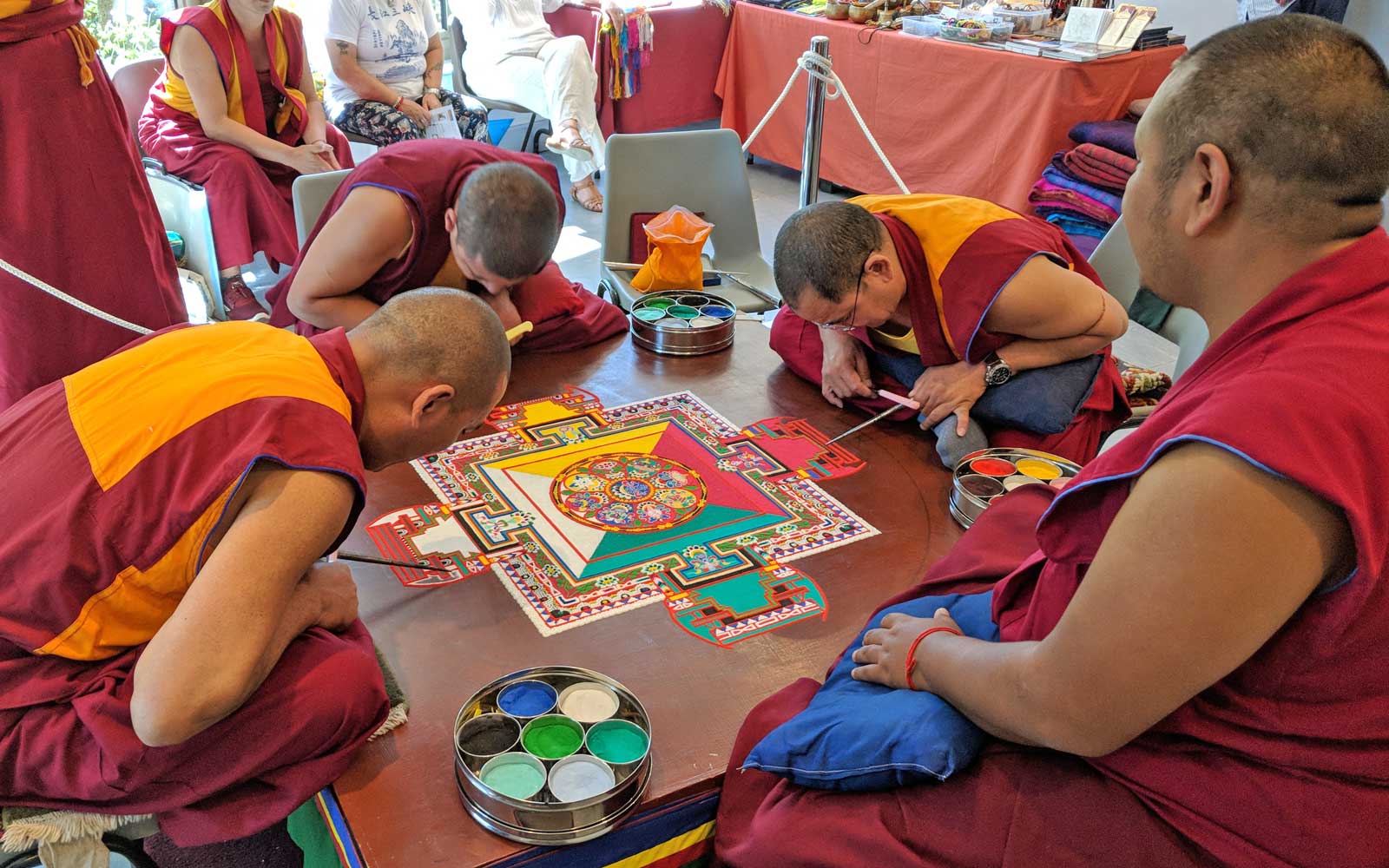 The monks have visited Shaftesbury previously. “We had such a fantastic reception last time,” David said. “The museum was pleased to see us and they give us a lovely room to work in. It’s good for the museum and good for Shaftesbury,” he said. “In the last 15 years we’ve spent time travelling around with them and bringing them to events such as this,” said David. “They become part of our family – like an extended set of sons to us.”

“The monastery is based in South India, about two hours from Mysore in Karnataka state, in a township called Bylakuppe,” explained David. “It is a Tibetan community which was re-established in the 1970s when the monastery was rebuilt. It was very small at the time and home to a few monks who had escaped out of Tibet,” said David. “Today it is a thriving community of 450 monks, surrounded by other monasteries as well. One of the monasteries up the road has 5,000 monks,” David said. “We’re small but very special.”

As I entered the museum’s Garden Room, four of the shaven-headed monks were sitting in their robes around a large, low table. One of the men was cross-legged at its side. His three colleagues were leaning over the table and concentrating intensely as they formed the colourful design of the Mandala, which covered the tabletop.

The monks scraped what looked like the plastic handle of a screwdriver along a thin, pointed and serrated silver implement. It resembled a long cheese grater. Almost as if they were icing a cake, the men were slowly ‘piping’ grains of coloured sand onto the tabletop to slowly form a pattern. 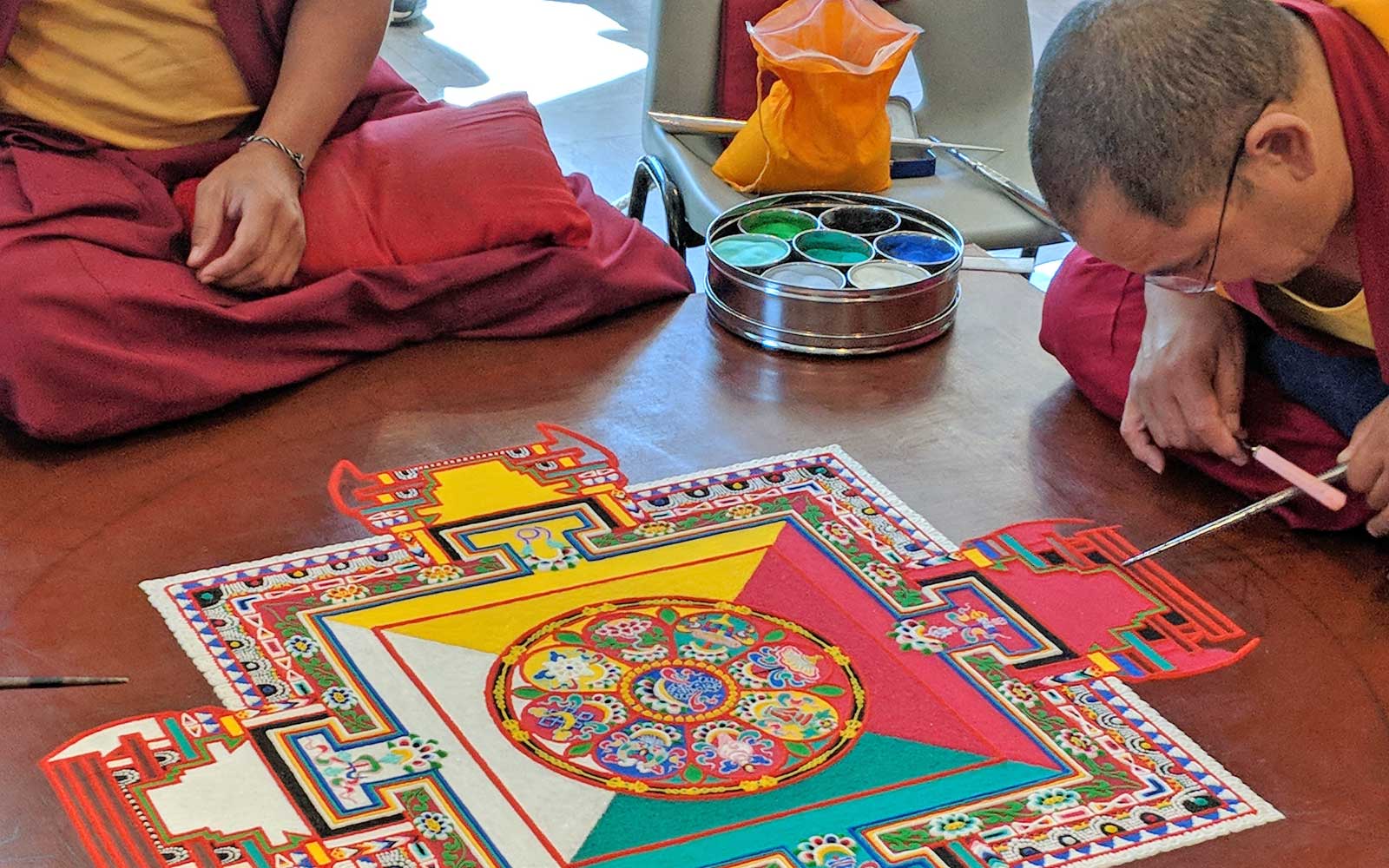 “We call it a sand mandala but in fact it’s crushed marble,” said David. “Those pipes are called chakpurs. They enable the monks to lay the coloured marble onto the table by vibration. The middle section has a serrated part to it and allows them to control the flow of sand onto the table to create this wonderful design.”

The Mandala was stunning – a highly detailed and symmetrical series of geometric shapes, swirls and symbols in vibrant pinks, greens, yellows and blues. “The monks visualise this as a palace,” David explained. “It’s there to invite a particular Buddha to come and stay. It’s supposed to be the most beautiful thing you can possibly make, in order to invite the Buddha to reside there.

Last Monday, when they laid the first grains of crushed marble in the middle of the Mandala, they were building the shrine room. That’s the main space that the Buddha would have been invited to stay in. Over the last two days the monks have been building the walls, rooms and garden of the palace.”

At the side of the table was a selection of pots containing different coloured sand. I asked Lakpar how the monks decided which colours to apply in order to create the pattern. The men didn’t appear to be following a template or notes. “It’s all in the Scripture,” Lakpar told me. “That says which particular symbol requires which colour.” 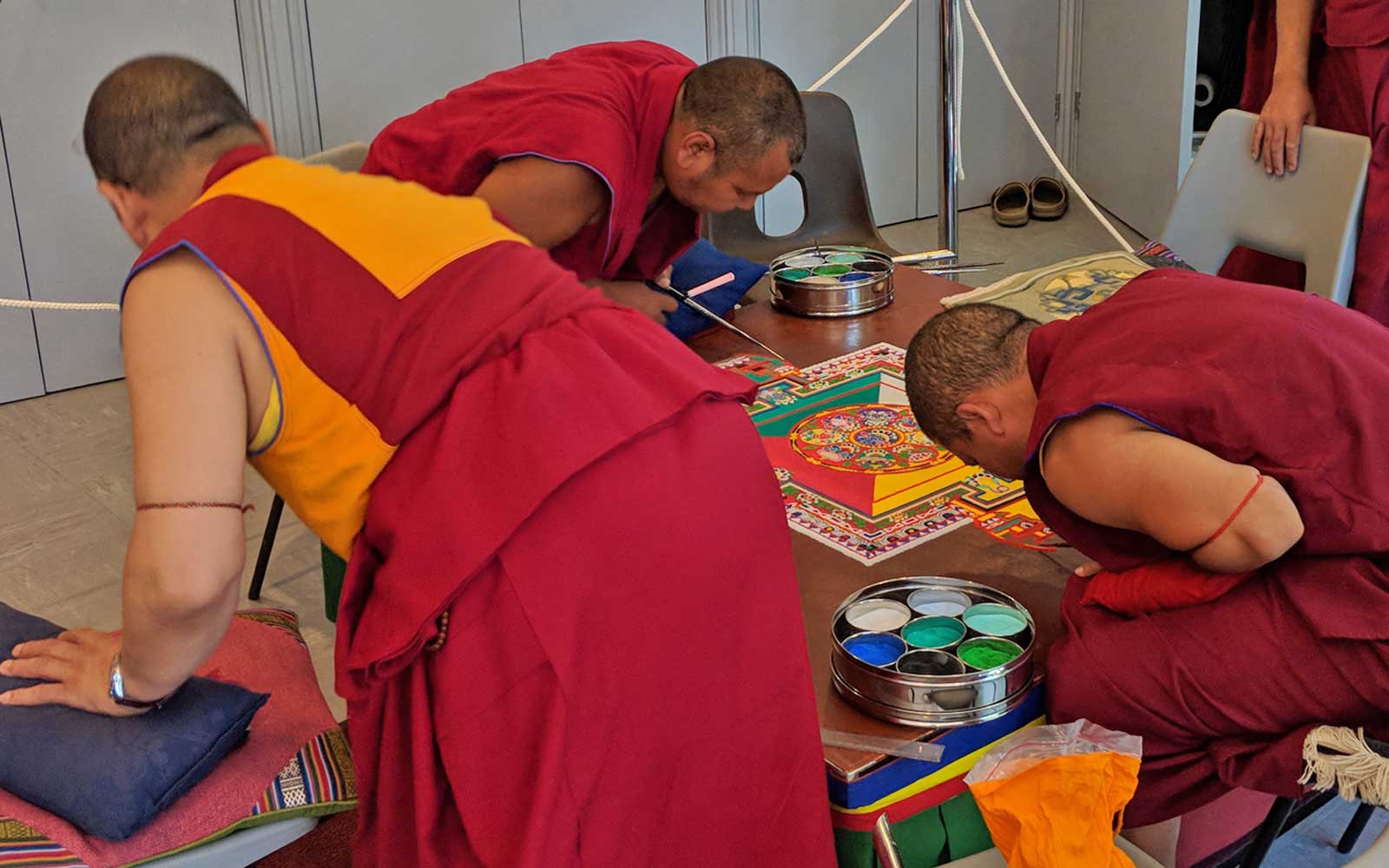 Lakpar explained that the monks memorised the pattern before they started creating it. I found that incredible. It was so intricate. I asked how many patterns he had memorised. “I can’t remember,” he laughed, adding, “There are lots!”

Once the design is complete, it is used for a ritual teaching. Then the Buddha is invited to leave the Mandala. As the pattern is formed of thousands of grains of coloured sand it can’t be transported, so the monks hold a ceremony to destroy it. David said that some visitors find that destruction difficult to watch.

“There’s a ceremony which takes around half an hour during which time the monks will chant, take dedication prayers and invite the Buddha to leave. Then, in the space of thirty seconds, by pinching out some of the sand, they effectively draw lines through the design. It is as if they were knocking the palace down. The coloured sands are swept, with a beautiful rainbow effect, into the middle of the table. This teaches impermanence and that nothing lasts,” David continued.

“We take some of the sand and put it into running water or into the ground to recycle it. Then, we bag up some sand and people can take it away with them. The individual grains are amalgamated into a wonderful packet of coloured sand.”

The destruction ceremony will start at 11:30am on Monday, 2nd July. It’s best to be there early. “It’s quite a small room so we’ll probably limit entry to around thirty people,” David advised.

I asked Lakpar how he feels when he destroys a Mandala. “We feel nothing because we are used to doing this. We do it two or three times a year in the monastery,” he replied. Lakpar told me the monks have made six Mandalas so far this year and they will make another ten before the end of 2018.

David said that the tour is important because it allows different cultures to come together. As we chatted, I smiled as I noticed one of the monks, dressed in his burgundy and orange robes, holding up a card payment reader, as he tried to get a Wi-Fi signal to process a transaction. “The monks are very westernised. We use our travelling shop to raise funds for the monastery. They take it seriously,” David said. “We have a thriving school in the monastery, a dispensary and we pay for food and the general upkeep of the monastery. The shop has been an integral part of these tours,” he added.

You can view the monks working on the Mandala inside Gold Hill Museum’s Garden Room from 10am to 4pm each day, up to and including Sunday 1st July. The Mandala will be destroyed at around 11.30am on Monday 2nd July. There’s an evening of sacred prayers, dancing and chants at Shaftesbury Town Hall at 7.30pm on Thursday 28th June. Tickets are £10 and are available at Nature’s Treasures on the High Street.