Mark Dawson is a disrupter. The former lawyer wrote his popular novels on the train each day, commuting from his Salisbury home to his London office. Mark had secured a traditional publishing deal, but he became disenchanted with publishers after he received neither the support nor income that he hoped would accompany his first book.

So he devised a successful plan to cut out the middleman, by releasing his own work online. It’s the publishing equivalent of selling your goods at the farmers market, rather than supplying to Tesco. And it’s paid off.

“Each year, the Society of Authors publish the median income of authors,” said Mark. “It is about £10,000 a year. You’ve got Booker Prize winners going back to their day jobs because they can’t pay their mortgages. Without ‘bigging’ myself up too much, I made more than £10,000 last week.”

Mark has a clear message for anyone who is sniffy about self-publishing or who terms it ‘vanity publishing’. “They should join the 21st century. Those kinds of attitudes are very outdated. I’m speaking from the perspective of someone who sold a couple of million books.” said Mark. “My view is that vanity publishing is wanting to have your book in a bookshop, facing readers as they browse the shelves.”

The Wiltshire-based author spends his mornings writing plots and his afternoons on promoting his work. And the pounds seem to follow. “What I’m most interested in is telling stories that entertain my readers and pay my mortgage. If you get a traditional deal, like I had in the early days, if you’re lucky you get 15% cover price. As a royalty, your agent would take 10% of that. For a £10 book, you get pennies every time you sell one,” said Mark.

“On the other hand, Amazon gives me 70% of the cover price, so I can sell a book for £6.99 and I’ll be making about £4.80. It is significantly more money than you’d make as a traditionally published author,” he added.

Marketing has played an important part in Mark’s success. He’s developed a strong social media following and a mailing list, through which he communicates messages about his new releases.

Even though Mark cuts out the traditional publishing houses, he says that you shouldn’t sacrifice quality in book design or cut corners in the presentation of your work. He makes his books available through a print-on-demand service, which can supply a few dozen copies for a bookstore that has received shopper enquiries about stocking his work, or one print for a reader.

“All of my books are available in print. The quality of the printing is almost indistinguishable from the new Lee Childs book. It’s a very high-quality product. Amazon has facilitated print-on-demand. Amazon prints either ten or one, depending on what the order is. The distinctions between how something is published are becoming less and less stark these days. Things are closing up quite quickly.”

Although Mark will touch on some of his creative processes during his Shaftesbury talk, style is not going to be his main focus of the evening. “I can talk about the process I use when I’m writing new things, but I don’t usually talk about craft. I have an instinctive understanding of it. It’s not something that I’ve ever tried to codify in any way that would be useful. I can talk about dialogue and thinking from the perspective of a reader,” he explained.

Mark’s experience offers a text-book example of how the internet has transformed publishing and can offer aspiring authors incredible opportunities for recognition and reward. But there is a downside. Mark warns that the net can expose authors to savage criticism.

Mark is generally in-demand as a speaker because of his success in embracing this new approach to self-publishing. “I go around the world and talk about marketing. It’s the thing that I’m best known for within the author community. It’s how to present a professional product, and then how to find readers, get readers to enjoy that and move on to the next book.”

Some writers might appreciate what Mark has achieved but they don’t have any interest in marketing, or they don’t think they could do it. Mark says there are solutions, but you need to choose them carefully. “It is probably worth looking for a deal with someone who will publish for you but there are a lot of sharks now. I see them all the time. They will offer the writer the chance to get published, but they want the writer to pay for that. It might be £3,000 to get the book published. They’ll make promises of PR campaigns and sending the book to Hollywood. It’s all nonsense. If anyone is asking for money to have something published, that’s a big red flag,” said Mark.

If you don’t want to publish yourself, you can approach a smaller, micro publisher. Mark recommends Joffe Books in London. “They have got authors like Joy Ellis and Faith Martin. Look at the top 100 on Amazon. Those are retired authors, who will never really have had much success when they were writing previously, but now are making thousands of pounds a month through selling their books with Joffe.”

If you believe you are a good writer, Mark says his talk can help you understand how you can embrace Amazon and start earning. “That’s the goal. You don’t need to want to make money, but most people would. It could be a lot of money or it could be £50 to go for a nice lunch once a month that you wouldn’t have otherwise,” he said.

Mark has also set up a tutorial business where he teaches aspiring writers how to achieve his level of self-publishing success. “We’ve had plenty of students, many of whom have made a lot of money – six figures. They are people who were struggling to get their book sold originally, but then when they learn about the strategies and tactics that are available today to authors, they often quite quickly go from standing starts to doing quite well.” 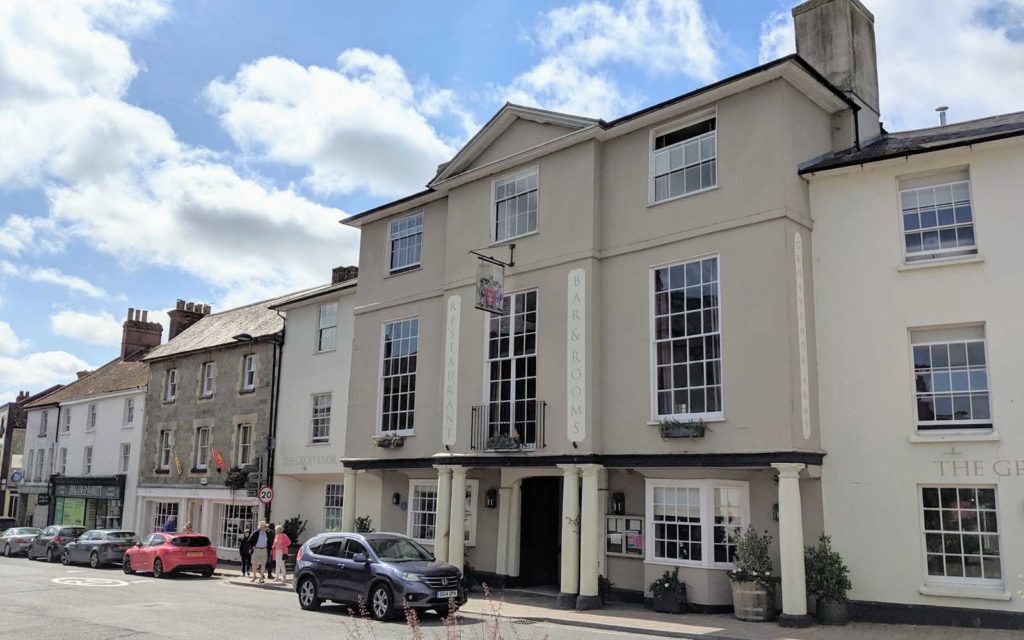 So what would you like to know? You can ask your questions of Mark at his talk at The Grosvenor Arms Hotel at 7pm on 3rd October.

At 7pm on Thursday 17th October, the author of the West Country Trilogy, Tim Pears, talks about his writing. He has been described as a modern-day Thomas Hardy.

The third talk, at 7pm on Thursday 7th November, is for lovers of the outdoors and adventure. Runner, skydiver, bungee jumper, climber, cyclist, world traveller and former banker, Sarah Williams, is now presenter of the weekly award-winning Tough Girl podcast.