By this time next year, Shaftesbury’s secondary school-age pupils could be staging their own musical.

ThisIsAlfred attended the re-launch of Shaftesbury Arts Centre’s Music and Drama Youth Theatre on Wednesday night. And Keri Jones discovered how a ball game, a bus crash and space travel were crammed into a fast-paced workshop to help the students hone their performance skills.

Stephanie Prideaux-Aspinall and Sophie Lester quickly brought order to a room buzzing with the energy of 26 enthusiastic youngsters, aged between 11 and 16. The women have learned stagecraft and performance skills through perseverance and by ‘treading the boards’. Now they want to share their knowledge with Shaftesbury’s next generation of amateur actors, singers, dancers and backstage crew.

“It’s all been gained through our experience at the Arts Centre, building from the ground up and figuring out how we’ve done it and how we can help the kids to do it themselves as well,” said Stephanie.

There were attempts to rekindle the Arts Centre’s youth group last year. “We had the soft re-launch in the autumn term pre-pantomime, to get more kids involved. And then this is the brand new and improved Shaftesbury Arts Centre Drama Group,” said Stephanie.

The women’s effort in producing promotional posters and Facebook posts paid off. Stephanie was delighted with the response. “It far exceeded my expectation for the first night, so this is great,” she said.

Sophie was particularly pleased to see some new faces. “I think we’ve got some of the kids who are in panto returning. But I think, more importantly, we’ve got some new children, which is just brilliant. We can start at that level and just grow as our reputation builds,” said Sophie.

The women don’t want to create just one youth theatre group. They’re hoping to establish multiple teams. “The age range of 11 to 16 is really popular and I think that’s because they’re in secondary school and they have GCSE drama. I’d love to have a couple of 11 to 16 year old groups and a 16 to 19 year old group. There’s a real lack there. When they turn 16 they’re not quite old enough for some of the parts in the adult shows at Shaftesbury Arts Centre, but they’re still really talented,“ Sophie said.

The women have a goal. They want to train these keen newcomers so they can put on their own production in 2020. Stephanie tossed the title ‘Bugsy Malone’ into our conversation.

It had gone 7pm and as the youngsters milled around, some awkwardly looking for familiar faces to chat to, Sophie brought the group to attention. “Grab a sticky label, pop your name on it and take a seat on the floor please guys,” Sophie shouted. She quickly had most of the group’s undivided attention before more conversations broke out.

Sophie wanted to know how the children would like to be involved – and she doesn’t consider ‘behind-the-scenes’ to be a secondary role. ”I’d like to see some of the youth come through in the backstage areas – in lighting, sound, costume and props. If you don’t have them, you don’t have a theatre show,” Sophie said.

With the group seated and anticipating action, Sophie decided to quiz them on their motivation. “How many of you are doing GCSE drama?” she asked. Half the group raised their hands skywards.

“How many people have been on stage before?” Sophie continued. Just under half of the ground responded.

“How many like singing?” That was popular. Hands shot up. “Great,” said Sophie.

“How many like acting?” Most of the kids indicated that they did.

“How do you like being backstage?” Just two people responded. This intake preferred being in the limelight to hiding in the shadows. “Oh,” said Sophie, seemingly disappointed, before she steered the group towards their first exercise, which was all about making introductions. “We’re going to do it through a game, making it fun,” Stephanie said.

The group rose to their feet and stood in a circle. Sophie handed a ball to one youngster. She had to state her name, before naming the group member whom she was about to toss the ball to. After ten minutes of name-calling and ball throwing, the ice had been broken and everyone had introduced themselves at least once.

The session moved onto theatre exercises. That’s what the youngster had come out for. The group explored characterisation. “During the pantomime season, we realised that a lot of the kids had never really done anything like this before. We figured that it’d be nice for them to learn a bit more about background acting and self-directing,” said Sophie. “If you’re given a base character, like a person in the crowd or a Victorian child, how would you characterise that? How’d you learn how to move as that character?” asked Stephanie. “In the pantomime they were baby rats. How do you build on the basic characterisation you’re given and make it your own?” 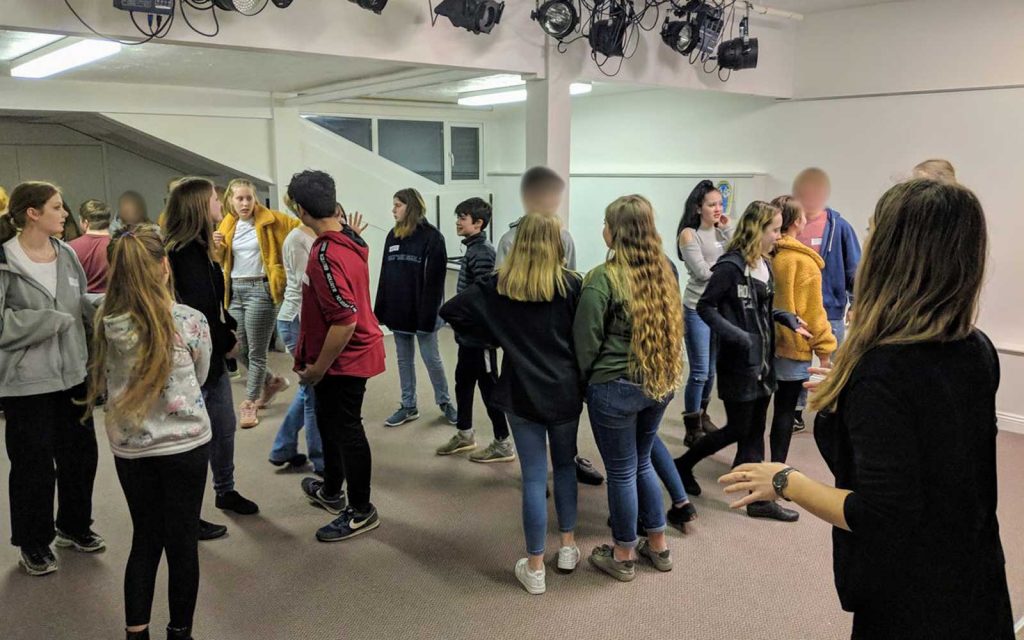 The students’ improvisation skills were tested as they acted out a ‘slideshow’. Stephanie told the actors that they had to pretend that they were bringing snapshots to life. “I want you all to think of a holiday or an event. You are giving a presentation. So the person says ‘Today we went to the beach’ and you all form a beach scene, or ‘We went to a farmers’ market’ and you can be stallholders and, if you really want to, you can be a cow. Go for it,” said Stephanie, as huddles formed for animated discussions to decide the scenario they would act out.

The first group stepped onto the raised area in the Phoenix Room and acted out their story, a lunar landing. “So we went to space because we went on a rocket, and then we landed on the moon. We explored and we found an alien,” revealed their narrator.

There was laughter as the group pretended to be space monsters. The next team pretended to be standing on a crowded bus, which was in motion. They all leaned to the right as their imaginary vehicle turned the corner and seemingly crashed.

Student Marcus Wynter told me that he had signed up for the sessions because he hopes to complement his studies. “Just to experience real drama because I chose this as one of my options for GCSE,” Marcus said. He went on to say that he rates actor Hugh Jackman highly.

The students seemed to be having fun as they developed an understanding of the art of performance. Appreciating other actors’ work is another important part of the learning and two Youth Group theatre trips are already on the cards.

Sophie is keen to provide an opportunity for local children to express themselves in an affordable way. “We’re trying to keep the cost really low. It’s a £2 charge each week. It is literally for resources and to support theatre tickets, to help give the children exposure to lots of theatre,” Sophie said.

While the first evening was a success, Stephanie says its not too late for youngsters to join in time for future sessions. “We’re always open to new people coming along. If you’re busy one night, then you’re more than welcome to come in and join whenever you feel like you’re ready,” Stephanie said.

For some of the young actors, tonight’s workshop will be the start of a rewarding new hobby. A few group members may stick with theatre, as Sophie and Stephanie have, and help secure the future of live amateur productions in Shaftesbury. I walked downstairs and left the building. As the sound of laughter and improvised acting escaped onto Bell Street, I wonder whether I’d had witnessed the first public performance of the next Olivia Colman? Time will tell.

You can get more information at the Shaftesbury Arts Centre website.