Shaftesbury Arts Centre’s summer musical, Mack and Mabel, opens this evening. The show, which runs until 21st July, tells the story of the early 20th-century film director Mack Sennett and his on-going relationship with the actress Mabel Normand.

Sennett was the silent moviemaker who found industry success making the Keystone Cops and Bathing Beauties films. The show is packed with big songs and brilliantly staged dance routines and yet there are some bittersweet moments and an unexpected ending. Director Sophie Lester was interested in the show because it’s about real people. “It is based on a true story. But when you delve into the actual history you realise that the writers took a bit of poetic licence. Most of the characters are real-life people,” said Sophie.

Mark Blackman is on stage, singing and acting through most of the show as the lead man, Mack Sennett. With his big, theatre-filling voice and a convincing Bronx accent, Mark effortlessly brings Mack Sennett to life. “It’s a hell of a part. Michael Ball jokingly referred to it as the ‘Hamlet’ of musicals. If I’m offstage, I’m back on again soon,” said Mark. 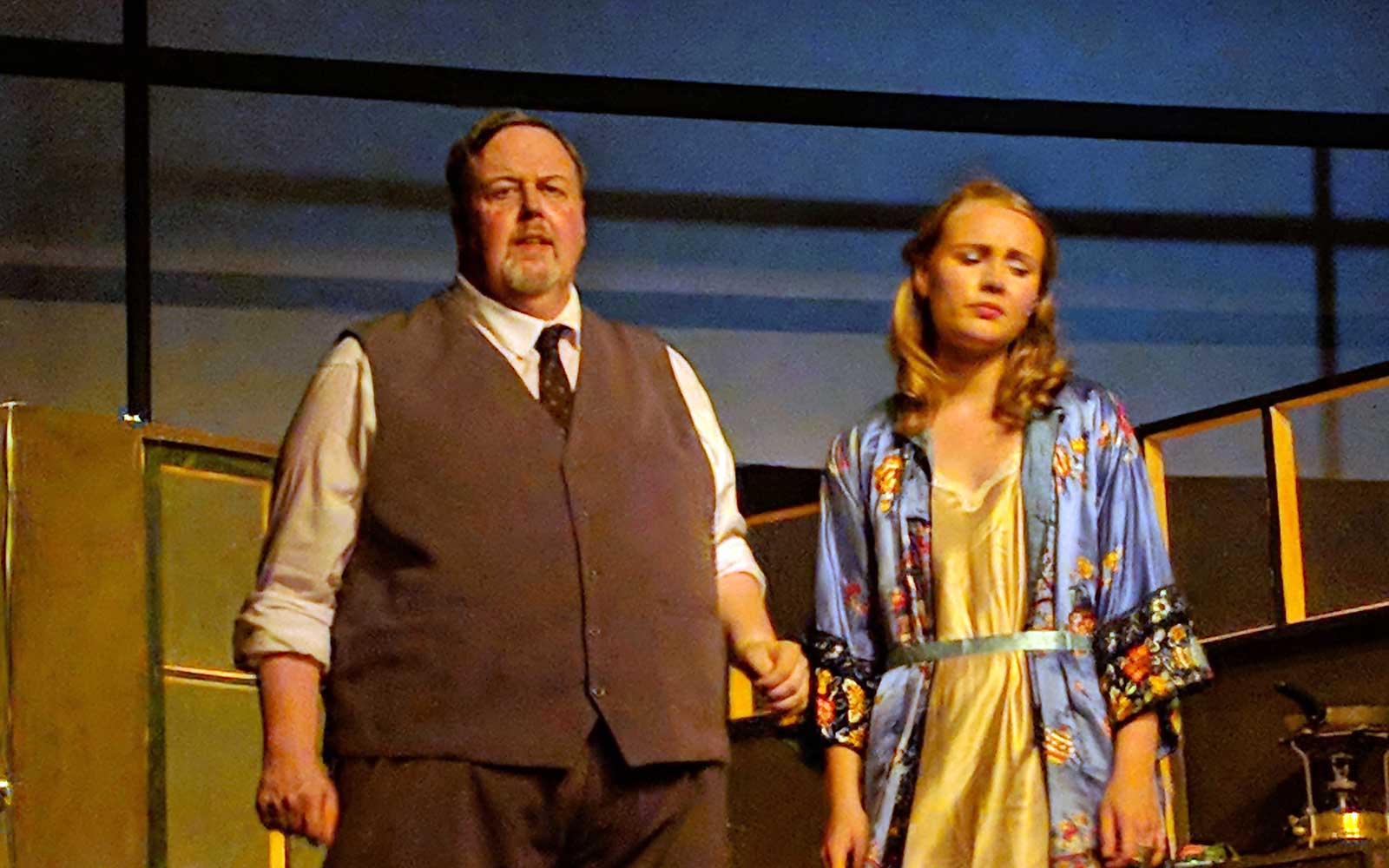 Mark is highly knowledgeable about the moviemaker whom he is portraying. “He used to dream up stories in his head when he worked on his parents’ farm in Canada. And then, when movies started, he realised that his ideas could be turned into something on the screen. He was one of the founders of the early silent movies.”

“Mac Sennett became known for ‘two-reelers’. A reel would only last five or 10 minutes. A two-reeler was a 20-minute silent film with a load of nonsense happening, which made people laugh,” said Mark. 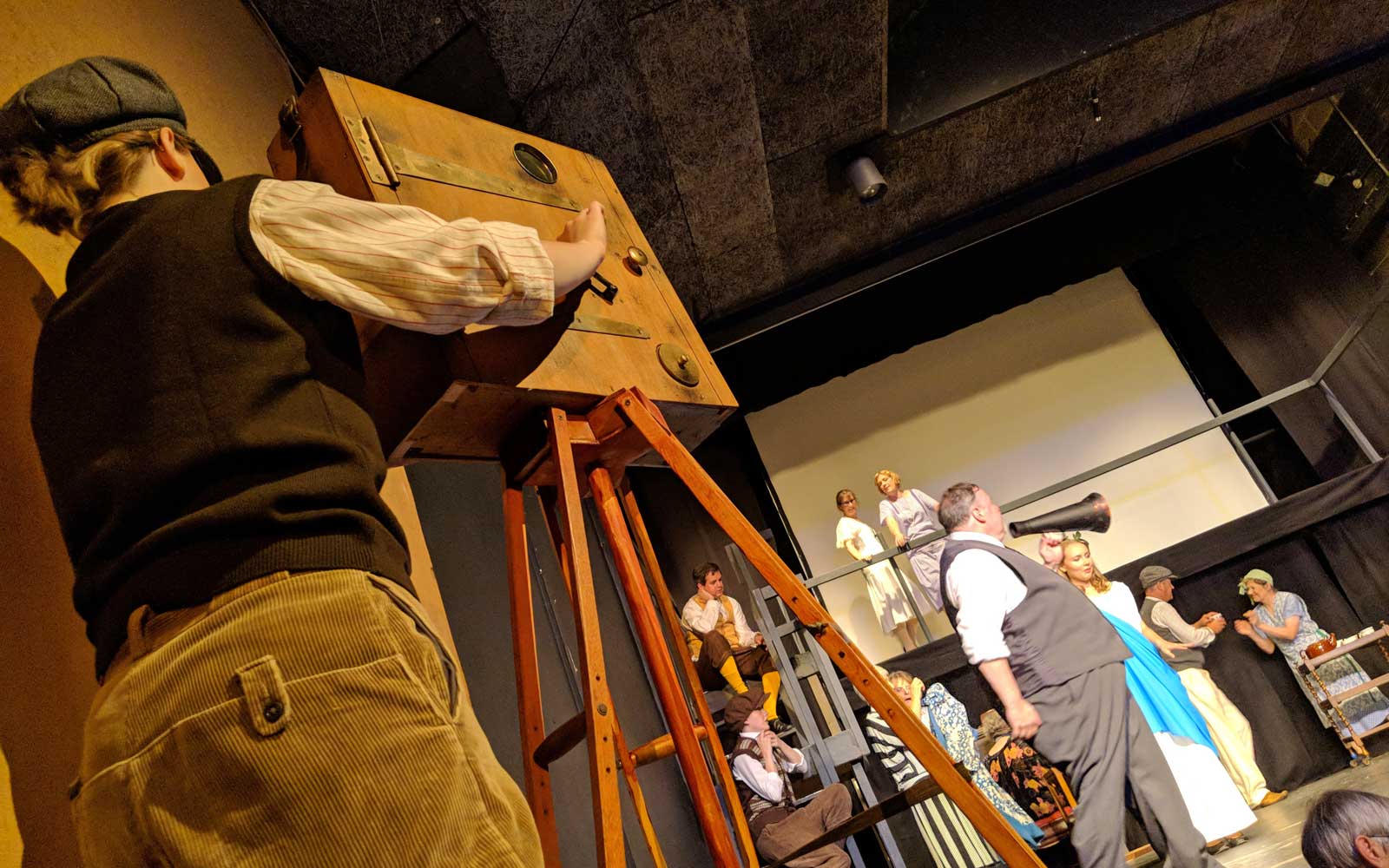 Sennett used to turn the films around quickly and you get a sense of that time pressure during the production. He hollers and shouts at the crew when light starts to fade and insists they rise at dawn to continue production. “You make those movies as quick as you can; with as little editing as possible. He was releasing six films a week in 1910 and 1911. He made hundreds of movies. We see the idea of the Keystone Cops happen in the show and he filmed the first custard pie fight ever,” said Mark. That is a fun scene, which I’m sure the audience will enjoy!

Like many good musicals the central theme is one of love although, again, the writer may have stretched the truth.” Jerry Herman decided to romanticise the story. In real life they did have a bit of a fling – probably,” said Mark.

Director Sophie thinks the love interest lifts the story. “I think we’ve got some really special moments in the show, particularly between Mack and Mabel. The way that the two actors playing them have captured the emotions – I think that is quite spellbinding at times. In the second half we see the tragedy of people abandoning Mack. Mabel doesn’t but he cannot give her what she really wants. So we see her leaving. In real life, Mabel died of tuberculosis in 1930. We see that in the musical,” said Sophie.

Beth Gray, who starred in Shaftesbury Arts Centre’s production of Treasure Island, plays leading lady Mabel. “I think the ending is not as traditional,” said Beth. “It’s quite a sad ending but I think the audience will still really enjoy it. It’ll make a change.” 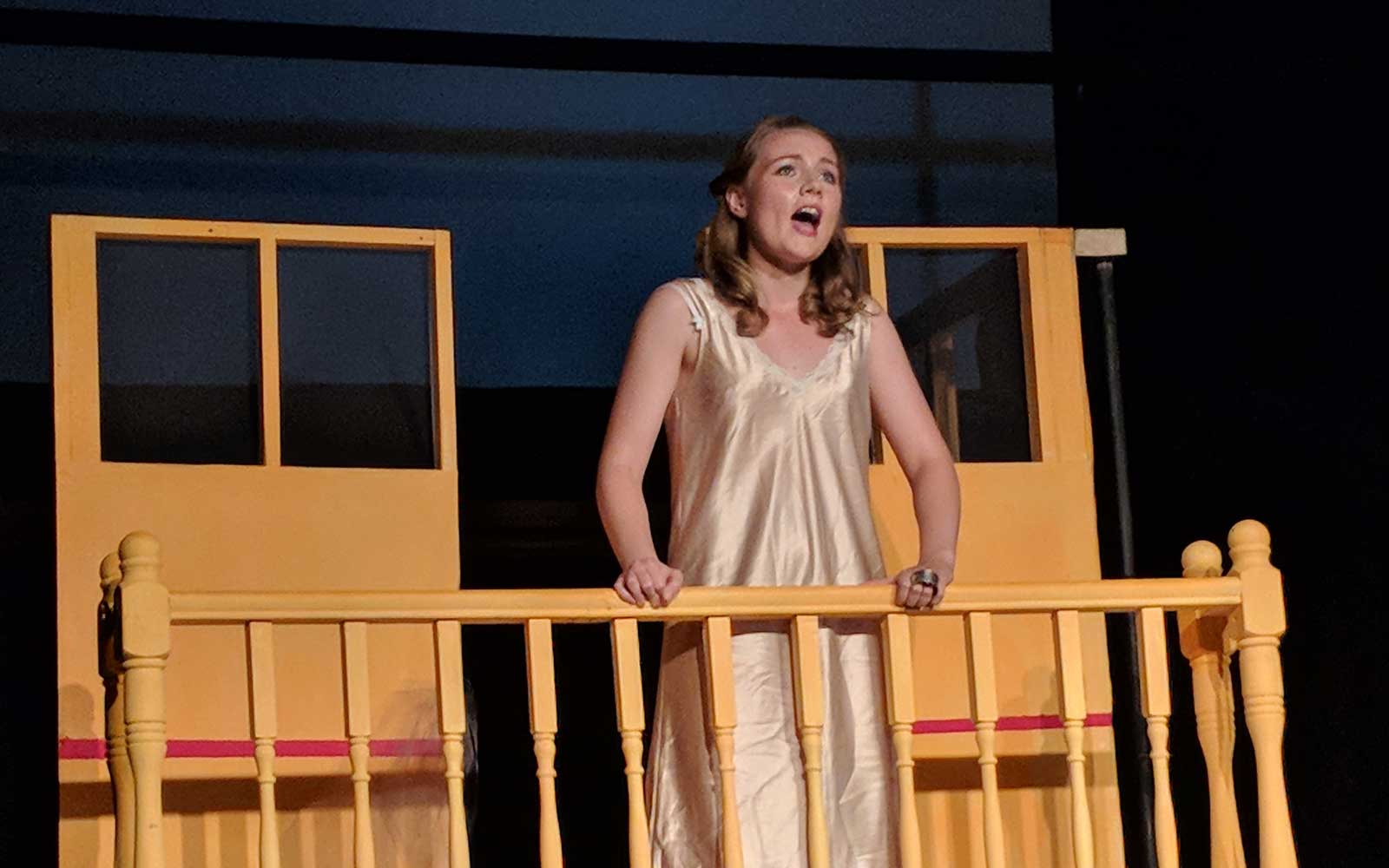 The audience will soon realise that they are watching Mack share his memories as he looks back on his life and career, sometimes with regret. “This story is through Mack’s romantic eyes after Mabel has died. They were a couple throughout a twenty-year period,” said Mark. “They met when Mack was 30 and Mabel was 19. In this show, when we first see Mable, she’s aged 19. Beth, who plays Mabel to perfection in my view, is 19. Then she has to age throughout the show.”

“I age almost 20 years. I have to think about my body language. I start off as a 19-year-old and it’s all hand gestures and a high-pitched voice,” said Beth, who also has to play a terminally ill Mabel towards the end of the show. “It is difficult to have that big change,” she said. Beth plays the ill character by altering her posture. “She is really frail. I’m hoping that comes across. I’m hunching over more at the end. I’m more self-aware than when she was younger and I make my voice really gravelly as well.” 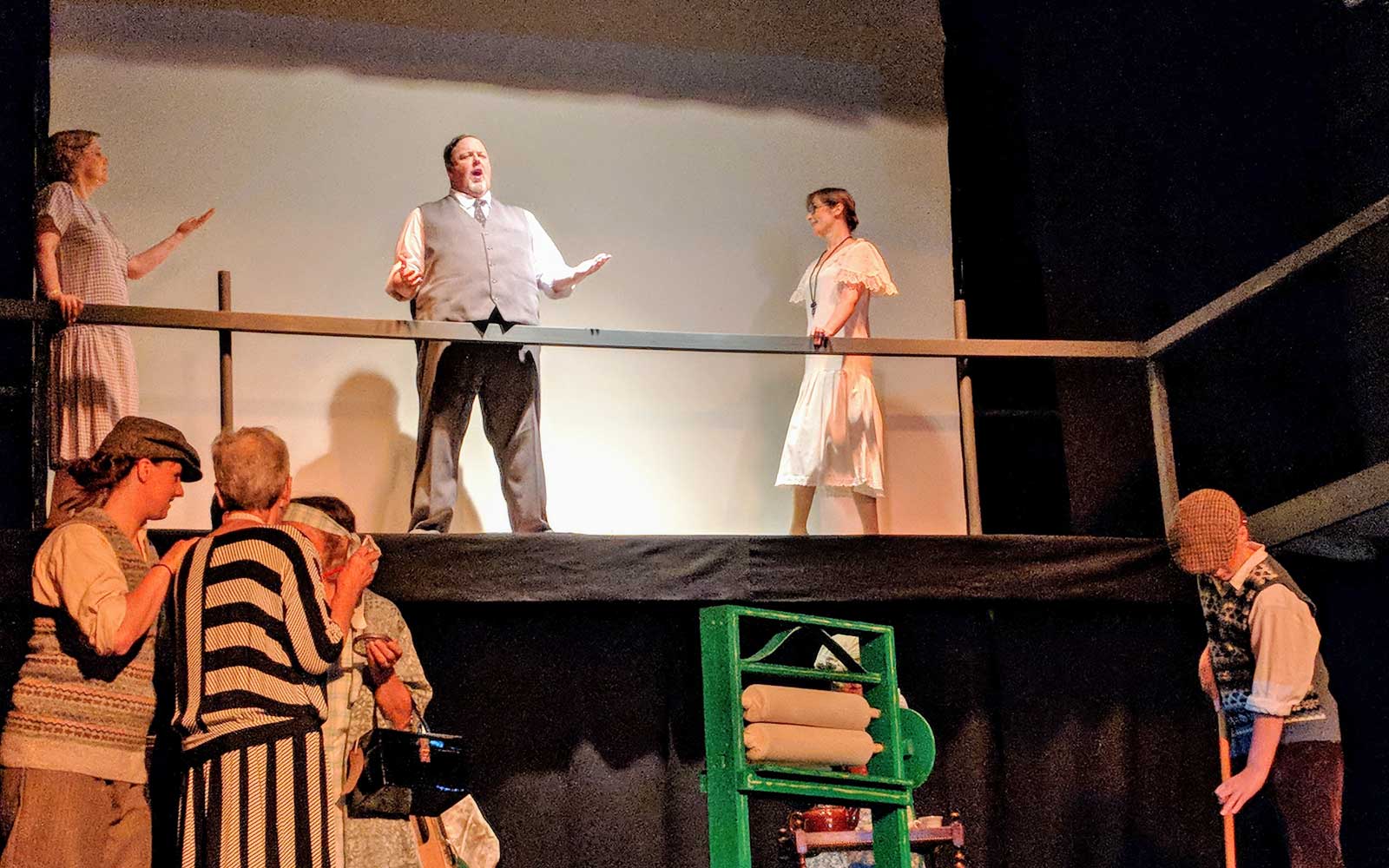 Mark believes the characterisation follows the traditions of the early films. “The show itself is like a silent movie. It’s very much black and white – hot or cold. There are goodies and baddies.”

During the show, black and white silent movie clips are projected onto the back of the set. The production team has blended vintage film footage with movies made of the current cast and that enhances the show. “It adds to the feel that it is all about silent movies,” said Sophie.

The production has taken months of work and Sophie has delivered a show that meets her vision for a summer musical offering. And Mark was full of praise for his director. “Sophie is pretty much the best director I have ever worked with. She is pickier than I am,” Mark smiled. “Her notes, often by email, will be as detailed as ‘will you not turn on that syllable?’ She has a great eye for detail,” he said.

Live musical accompaniment certainly enhances the experience. “It’s lovely,” said Sophie, referring to the twelve-piece orchestra that musical director David Grierson has put together. “They are sounding great and they are really loving it.”

“They’re playing some beautiful music”, added Mark. “Some people might vaguely remember Torvill and Dean dancing to ‘The Overture Of Mack and Mabel’ in one of their gold medal-winning ice skating performances. Some of the area’s best musicians come and do this, because they love it.”

It’s a great soundtrack and there’s some powerful singing. The show looks big. “We’ve got some big chorus numbers that, from a costume point of view, are really colourful and which add a great ‘wow factor’ for the audience,” said Sophie.

There is a lot of dancing, too “We have got two choreographers, Barbara Arnold and Eleanor Dillon. We’ve split the choreography and we’ve got a real range of movement pieces. There’s a tap number and there’s the ‘Bathing Beauties’ with parasols and beach balls. It’s just lovely, lovely choreography,” Sophie enthused. 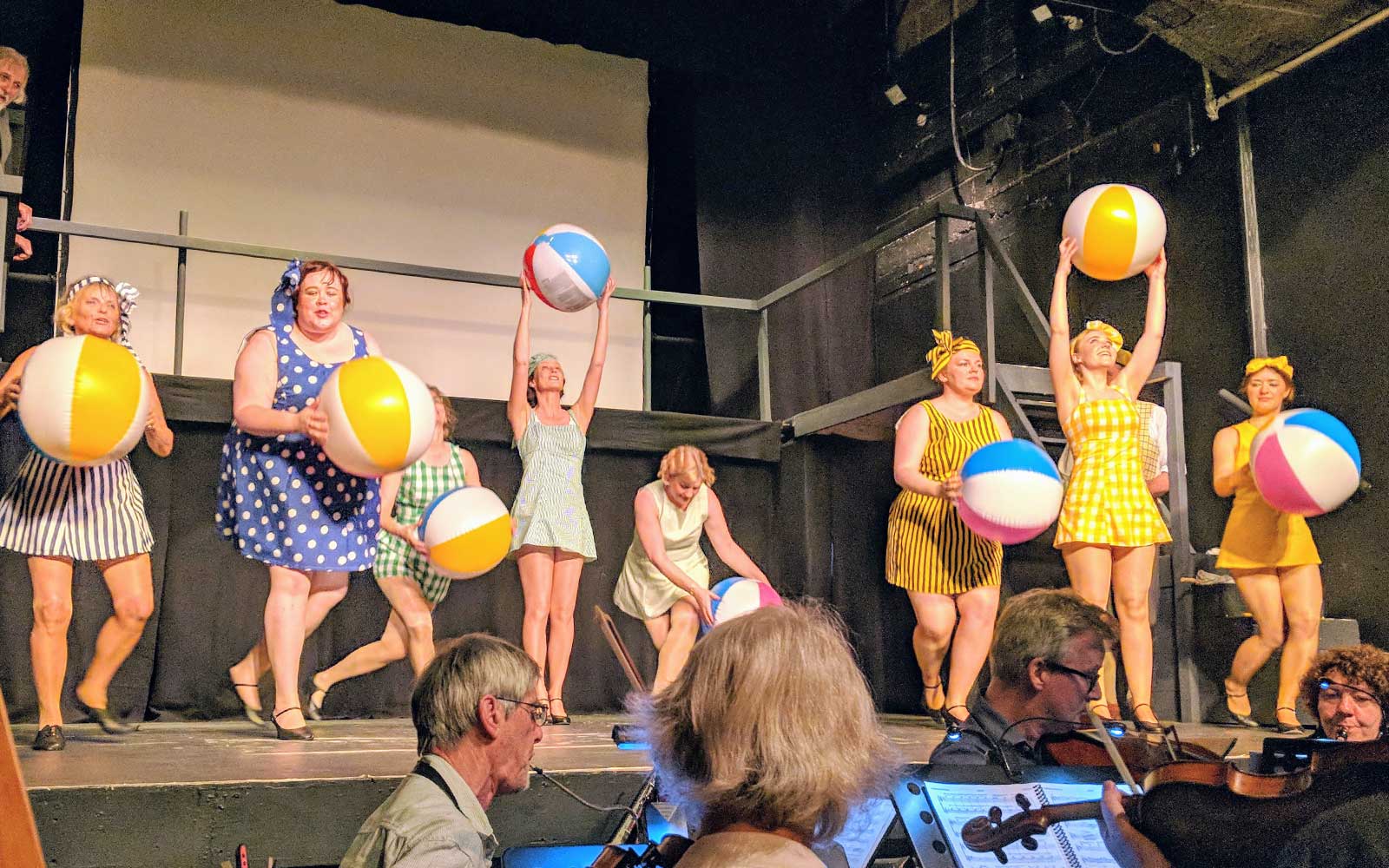 Beth dances brilliantly as Mabel but she admits she’s had to concentrate on her steps. “I have two major dances. Dancing is something that I have struggled with previously and I’ve had to have quite a lot of lessons,” Beth explained. “This has given me more confidence and when you are in character, it’s easier to fake that you know what you are doing,” Beth laughed.

Mack and Mabel’s musical score flows seamlessly. The soundtrack captures the essence of the early, black-and-white days of Hollywood. “This was a musical written at the end of the golden age of big, Broadway musicals. It was written after Jesus Christ Superstar and around the same time as Evita,” said Mark. “This was one of the last of those. It didn’t always work when it was first around. Now it’s being revived regularly.”

So why should you see Shaftesbury Arts Centre’s summer production of Mack and Mabel? “It’s not a well-known musical, but it is a real, real treat, said Sophie.

“You’ll see Keystone Cops, a custard pie fight, silent movies recreated on stage and a really good love story,” said Mark, adding, “You can’t get to see a show like this for £12.50 anywhere else!”

You can book a seat at ShaftesburyArtsCentre.org.uk.