We have a World Champion living in Shaftesbury. 15-year-old Adam Parry has just returned from France where he was crowned ‘Open World National Amateur Ballroom Champion’ along with his dance partner, Lauren King.

Keri Jones from ThisIsAlfred went to meet this talented young dancer at his Great Ground home.

“I’ve won the National Amateur World Championships at Disneyland Paris,” beamed Adam Parry. Adam’s schedule is busy and I was lucky to catch him. He had just returned from dance training in Southampton and, as it was Saturday night, I was conscious that Adam might be more interested in watching the ‘Strictly’ final than talking to me. We had twenty minutes to chat before Tess and Claudia took his attention!

Not everyone is familiar with ballroom dancing awards, so I asked Adam to put his recent win into context. How would his award compare to a football title? “This is like winning the Europa League, compared to the Champions League. It’s not quite the top level but it’s still a very prestigious event to win,” Adam said. 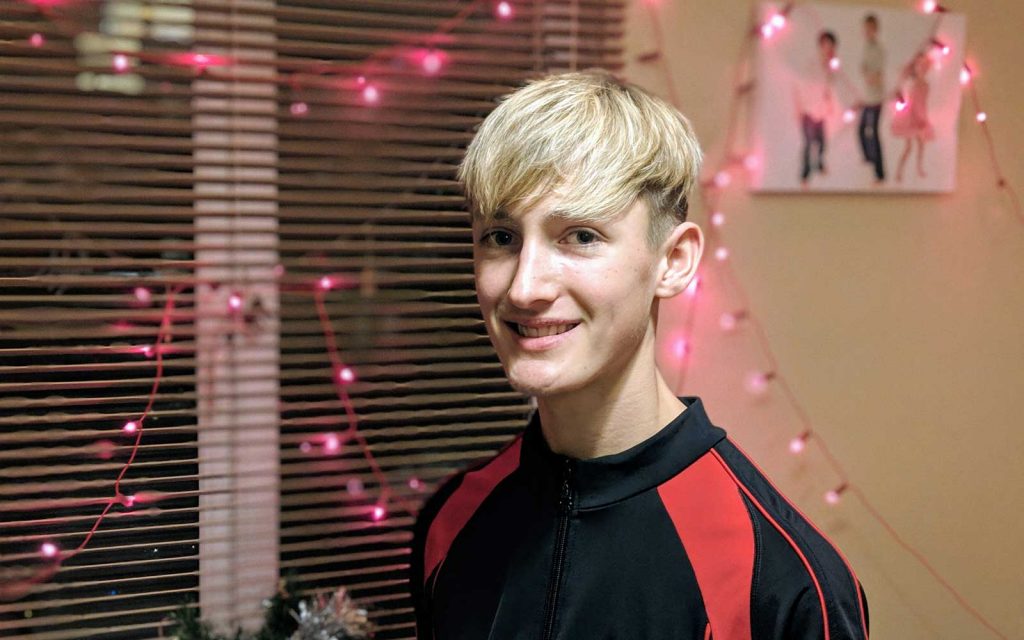 This contest was bigger than just Europe, though. Adam and Lauren faced strong competition from dancers from all over the world. “In this process there were forty or fifty couples starting the competition. There were couples from Australia, Ukraine, Russia and China. There were also many couples that go from England. It is a hard-fought competition,” Adam said.

Adam believes that Russia and Ukraine take competitive dancing most seriously. “In their countries it’s very cool to dance and there is a lot more enthusiasm for dancing, whereas in England there is actually a shortage of boys,” Adam explained.

Ukraine seems to be the place to go to develop your dancing skills. Adam told me that he hopes to visit that country for a weeklong training session and competition next year. It’ll be a kind of ballroom boot camp.

During the competition in France, Adam had to perform many different styles of dance from all over the world. “I danced waltzes, the tango, a Viennese waltz, foxtrot, quickstep and, for the Latin side of it, I danced the cha-cha, the samba, the rumba, paso doble and jive.” Adam thinks that his strongest performances were the ballroom dances and quickstep.

Those are a lot of different dances to learn, especially to the high standard demanded by international judges. But the Shaftesbury Secondary School pupil takes it in his stride. He has been dancing for a decade. “I started dancing when I was five. My mum, Caron, owns Caron Parry’s School of Dance. I’ve been dancing ever since but I had a break between the ages of seven and nine.”

As we chatted, Adam frequently referred to ballroom as ‘sport’. I asked him about this use of the word. “It’s quite physically demanding, which other people don’t see. There’s a lot of preparation as you go to competition.”

I could understand why Adam considers this intensive dance regime as a sport. He told me that ballroom should be offered as a form of PE in school. When you consider how much training, skill and stamina is required to perfect the moves, I understand Adam’s point. And like any sport, you get out what you put in. Adam has invested a huge amount of time and money into his quest for success. On average he dances for an hour a day but sometimes he’ll dancer up to four hours, and that’s often seven days a week. “Sometimes I will take a break on Sundays,” Adams said.

Winning is good but there are other benefits. Through his sport, Adam is seeing places and gaining travel experiences that few young men of his age get to enjoy. “We’ve travelled to Paris before. We’ve travelled to Portugal, other areas of France and, hopefully in the New Year, we will go to the Ukraine.”

Costs can mount up. As well as world travel, there’s the wardrobe to fund. Competitive dancers are expected to dress-to-impress. “We’ve got costumes for ballroom and for Latin. We wear tailed suits for ballroom. The girls have dresses. In Latin, boys wear shirts and trousers. We have up to five different shirts that we can change into for the different events. It’s the same for the girls with their dresses.”

When Adam was 13, he discovered a dance partner who attends a dance school in Southampton. The pairing worked perfectly. Adam and Lauren started competing across the UK and soon began entering international competitions. Adam spends more time with Lauren than anyone else.

“She’s more of a sister. I see her five times a week and I spend two hours with her every day. We do get on. There are a few arguments but things are never going to be perfect,” he said. “You’ve got to find someone you can work with and get on with but it’s always got to be someone who you can compete with this well. You don’t always want to be so friendly that you can’t criticise each other, to get each other better,” Adam said.

Adam’s mum runs a successful dance school, so is that helpful? Does Caron provide an honest opinion? “She’s definitely a critic but it’s really useful because she can help me with the footwork or technique of the different dances.”

Adam spends a lot of time making the 90 mile round trip to the Hedge End-based A&L Dance Academy where he trains with Lauren. He had to fit his rehearsals and travel time around his mock exams this year. Next year, he’ll be sitting his GCSEs. He expects to do a lot of his revision in the road. He even had to take his textbooks on the recent Paris trip.

“When I was in France, I was doing Spanish revision because as soon as I got back to school from Paris I had my Spanish exams,” Adam said. But he says that his school friends are all supportive of his dance. “Some of my friends react to it very well. They find it very different but they’re always congratulating me on my awards and always asking me about it.”

As Adam and Lauren get older, they’ll move into a new age category, which will bring a whole new set of challenges. “We will be moving up to the next age group, which is under 19’s, very soon as my partner is turning 16 in February. That is going to be a massive jump in this country and also in international competition.” So would Adam like to go professional? “I’m not quite sure at the moment but it would be a possibility,” he said.

It was almost 6.30pm and, knowing what was about to start on TV, I asked my final questions. Who did Adam want to win the TV dancing contest? He didn’t pick the eventual winner, Stacey Dooley. Adam backed Joe Sugg. He felt that the celebrity video blogger had developed dance skills quickly. “When compared to the other dancers, he is putting in so much time and work and, assuming that he has not had a dance background, he has improved so much,” said Adam.

And Adam is clear which Strictly judge he respects. “Shirley Ballas has come from the world of dance and she is very well known by everybody. She is just a top professional from her younger days.”

Adam is still in his ‘younger days’ and at the start of his career. He’s got time to decide which path he wants to take but with his recent award, it looks like the world is at his feet.