A Shaftesbury Abbey volunteer has uncovered the document that altered Shaftesbury forever. Stuart Edwards has been researching the life of Elizabeth Zouche who was Abbess when Henry VIII’s reformation brought about the Abbey’s destruction. Stuart told ThisIsAlfred how his discovery will form a key part of a revamped Abbey Museum experience.

It’s hard to imagine the impact that the demolition of Shaftesbury’s Abbey would have had on the town – physically, economically and socially. When the Catholic Church would not grant Henry VIII a divorce, he dismantled their institutions and our Abbey was one of many religious buildings razed to the ground.

Stuart Edwards is fascinated by the last Abbess’ role in this historic event and he’s been trying to find out what happened to her. “The Abbey had been here for about 650 years, and all that history came to an end one day in 1539, when she signed the deed of surrender.”

Stuart has now tracked down that original paperwork. “What I managed to find at the National Archives at Kew was the original deed of surrender for the Abbey, which was signed by Elizabeth Zouche and somebody called John Tregonwell. He was the commissioner taking the surrender.”

Stuart said that uncovering this deed was an emotional experience. “I did find it very moving to see this small, tightly written document with her signature on it,” said Stuart. “The moment she put her signature on that document, Shaftesbury changed for the rest of history.”

Stuart proudly showed me a photograph of this relatively small document, considering its importance. It’s approximately 14 inches by 10 inches. The text was difficult to decipher although I could make out Zouche’s name from her flowing black ink pen mark. “You can clearly see a signature on it,” said Stuart.

Stuart put Zouche’s significant influence and the Abbey’s important status into context. “Shaftesbury Abbey, at the time of the dissolution in the 1530s, was the second richest abbey in the whole of England. It had extensive lands around Shaftesbury and spreading up to Bradford on Avon.”

Locals knew how powerful the Abbey was. “There’s a famous saying that if the Abbess of Shaftesbury had been able to marry the Abbot of Glastonbury, their children would have owned more land than the King,” Stuart said.

Despite the Abbess’ status, Stuart has learned that Zouche cared about the fate of her nuns, in the face of the Abbey’s destruction. “She negotiated pensions for herself and for her nuns on the night before she signed the deed of surrender,” he said.

So why would the King, or his agents, give this woman so much money? “I think it was Thomas Cromwell’s commissioners who were doing most of the negotiations at the time. I think it was to the advantage of the King and to Cromwell to give people in the area a stake in what was going on. So rather than just turning them out with nothing, and there had been some rebellions in the north of England, it was a way of buying people off.”

If she remained ‘on side’ the Abbess would have been able to connect the King’s people with powerful locals. “We think she was connected to local nobility. And she was a very influential person, locally. But if she had really resisted, she may have ended up with her head on a pole outside the Abbey, like the Abbott of Glastonbury. She was a good political game player,” added Stuart. “I think she tried to resist as long as she possibly could. And when she couldn’t resist any more, she got the best deal both for herself and for the nuns who I expect she felt a responsibility for.” 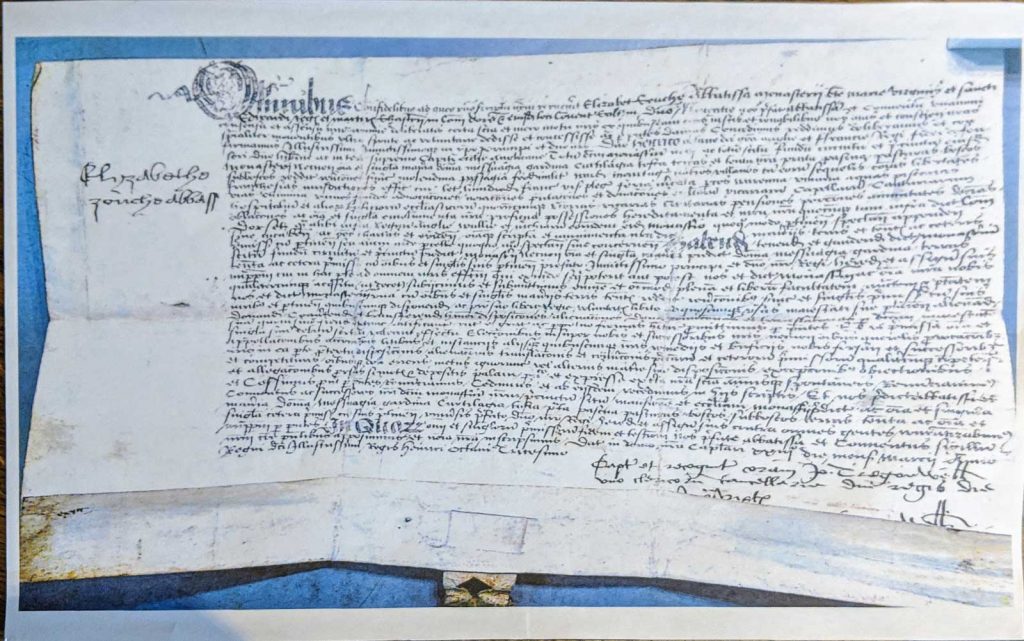 Stuart’s has theories about Zouche’s family connections. “I think she was related to the local Zouche family. There is a Baron Zouche who lived in Castle Cary and is buried at Stavordale Priory, near to Bruton,” said Stuart. “I also found that she was able to grant her pension to Sir John Zouche who was the MP for Shaftesbury in about 1550.”

Despite her sizeable gold handshake, historians haven’t been able to track Zouche’s movements based on her spending that wealth. “There isn’t really a trail. We don’t know very much. I’ve heard that she may have lived at Place Farm, which is now where Messum’s is. It was a summer retreat for her when she was the Abbess, but I haven’t actually found firm information on that.”

Stuart has learned that Zouche retained a sense of responsibility for her former nuns’ welfare. “I think it was 1553, about a decade after the surrender of the Abbey, that she gave a present to each of the nuns who were still surviving, which was the value of a goose. So she was still trying to look after her nuns ten to fifteen years after the surrender of the Abbey.”

Claire Ryley from Shaftesbury Abbey says Stuart’s research will be displayed when the Museum is revamped. “We are going to look at the whole of the Abbey Museum and restructure it. So it will be far more about the people who lived here and their lives,” she said.

Claire thinks that the unanswered questions about the Abbess will stimulate visitor interest. “We knew that Elizabeth Zouche left, but we don’t know any more about her. So what happened to her afterwards? What happened to all the other nuns? Did they disperse? Did they get married? Did they go back to their families? It’s the human stories we’re really trying to find out about,” said Claire.

Claire and her team have a lot of writing to do over the next year. “I will be pulling all the different strands together and will write it into a coherent narrative. And then we’ll be using that to inform the new interpretation boards in the museum. If all goes well, we’ll open with all this new information available in March 2020.”

In the meantime Stuart has shared some of his research discoveries online. “It was the first time I have put an article on Wikipedia,” Stuart says. He appears bemused by the process and the reaction to his posting. “Somebody in America vetted the article. A woman who, I think, is based in somewhere in Scandinavia and has an interest in prominent women in medieval and Tudor times contacted me. And she did a little bit of helpful editing on my article for me,” said Stuart.

As we ended our chat, I stood with Stuart outside the Abbey. I asked him what he would ask Elizabeth Zouch if she appeared here, right now. “I think I would want to know what was going through her mind when she signed the deed of surrender,” said Stuart.

So wouldn’t Stuart want to know where she put all of that money? “Well that’s maybe the next question,” he laughed. And who knows, as Stuart’s research continues, maybe we’ll find out.