You can only type 280 characters in a Twitter post. But that was enough to change the course of a Shaftesbury man’s life. Newspapers from Paris to Brazil have featured Christopher Oram’s story.

Christopher Oram has been invited to meet with influential politicians in Westminster’s corridors of power. He has been asked to speak at a major political conference this autumn. Politics now plays an important part in his life. Yet, three years ago, Christoher says he had no interest in what happened in Westminster, Dorchester County Hall or Shaftesbury Town Hall.

“I wouldn’t have been able to tell you who was in the Cabinet. I would have told you the Prime Minister and that would be about it,” he said. Four years ago, Christopher would not have dreamed of watching BBC1’s ‘Question Time’. That changed when he posted that he had changed his mind over Brexit on social media. He told the world that he believed he had voted the wrong way. Since then, he’s become heavily involved with a Brexit-related campaign. 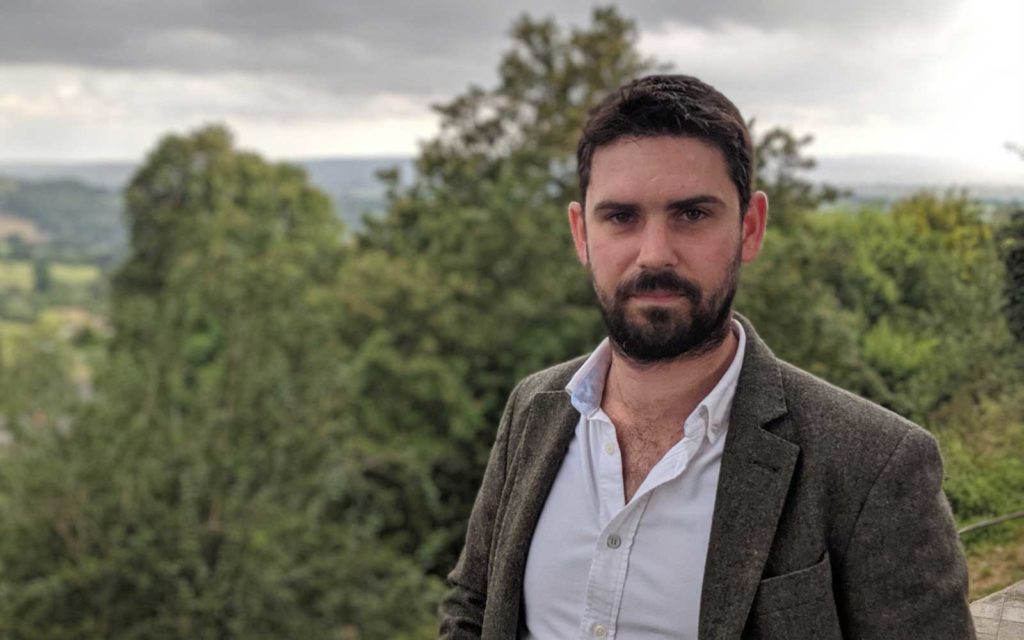 This article isn’t about whether remain or leave is best for Britain. Most of us have made our minds up. Many of us are bored rigid by divisive debates. Approximately half the population might disagree with Christopher’s position, so we’re not going to mention his stance. But we are interested in how a young man from our town has been transported into a totally alien environment, juggling a 55-hour-a-week overnight driving job with daytime meetings, videos and podcasts.

“I actually had a Twitter account since 2013, but never used it,” said Christopher. “It was April 2017 when I got back on the Twitter bandwagon, because it was a good platform for politics. A lot of politicians use it. That’s how I got started.”

Many people have changed their Brexit views, but Christopher has gained media attention because he’s been highly public about switching his stance. The media quickly found his post, which led to articles and mentions in Metro, France24, Japan Times and on MSN. An approach by campaigners soon followed.

“If you hashtag certain things, you will get picked up by other people. The campaign that I associate myself with found what I was saying about my change of heart. They got in touch, saying, ‘You fit directly into our values. Would you like to have a look at what we’re doing and get involved?’ What I didn’t know is that I was being ‘social media stalked’ by the guys, to make sure I was who I said I was.”

I suggested that sounded rather sinister. “It really isn’t,” laughed Christopher, “It’s quite the opposite. It’s important for a campaign like mine that everybody is who he or she says they are and that they did vote in a certain way in the referendum. If you have people coming on pretending that they’ve changed their minds, it completely destroys the point of our campaign.”

Christopher defends his right to alter his opinion. “There’s no point having a mind if you’re not willing to change it,” he said. “And the whole idea of democracy is based on an informed public. You should be allowed to change your mind. You should be able to revaluate and look at the facts again – and look at any new evidence based on that.”

Christopher is considering a political career now. I pointed out that admitting that you felt you had made a mistake and changing tack was not a usual political response. “This is the way that politics is going. It is quite often obvious to me that politics needs changing. The public at large have had enough with the politics of the time,” he said.

Christopher has been working with some political influencers. “I’ve been to Parliament twice to have debates with cross party MPs. I went to marches. I’ve done quite a bit. Whenever something new comes up, I’m always the first person put my name down for it.”

Christopher has launched his own podcast, recorded here in Shaftesbury, and he’s guested on other commentators’ broadcasts. He has been filmed, too. “I’ve done a lot of videos with political websites,” he said, and some have been widely viewed. “My latest one has been seen half a million times.”

He’s been recognised from one of the videos filmed on Gold Hill. “I’ve been stopped in the street a couple of times in Shaftesbury, which is quite interesting because the video would have gone out to a much larger audience on a national level. I didn’t expect many people in the local area to have seen it. Somebody locally shared it,” he said.

Christopher has risen to prominence because of social media. Some might argue that social media is creating a division in politics, because it can be tribal – you follow your friends, often like-minded people, and only read their views. It’s an ‘echo chamber’ where you are served up the opinion you are likely to agree with.

“I don’t get all of my facts and figures from social media. I go to different radio stations,” said Christopher, who often appears as a caller on LBC. “I watch all different types of TV and parliamentary question time to gauge the feeling in the House. You are going to get a blinkered idea on politics if you’re just going to follow social media,” he said.

Sometimes online political spats can become very personal. “Oscar Wilde said that if you want someone to speak the truth, give them a mask. You see that a lot with people on social media because they have the defence of being far away in a room somewhere and not within arm’s reach. They can hide their face, the location and their name. They feel confident to be able to spit poison via social media. When you have a conversation face-to-face, things don’t get out of hand. You can use your body language and your tone to adjust the conversation.”

We all know how passionate people are about their Brexit beliefs. I asked Christopher whether his family had raised concern because his strong views are likely to attract critics and, potentially, online abuse. “My family has been very supportive. I come from a background of, ‘If that’s what you want to do, then go and do it’. If we have a difference of opinion under our roof, we’ve got to put that to bed and not argue about it as a family. We don’t talk about politics at home. A lot of my friends have been quite supportive although I have lost a couple because of my position,” he explained.

He has fallen out with mates because of his stance. “They’ve actually questioned me on social media and demanded that I tell them why I did what I did and why I’m doing what I’m doing. When I start asking questions back, it becomes an argument, which is not what I’m trying to achieve. I’m trying to get people to look at things from a different perspective.”

Christopher has received online threats from strangers. “A couple. I’m not big enough to really get a lot of grief from trolls although a couple of threats took me completely by surprise. I deleted them, blocked them and moved on. These are the kind of people that want to vent their own venom. Half the things they say they don’t mean,” said Christopher.

Some politicians have voiced concern over venomous attacks. Is it ‘water off a duck’s back’ for Christopher? “At first, it can be affecting because I’m not a politician. It’s not something that I’ve experienced before. To have threats like that over social media was a shock. I had to go and talk with my other half and speak to my family to get a perspective on it, so I could then let it go. I’m now in a much better position to not let it affect me. It’s only because I’ve never been in that position before that it was an issue for me.”

I asked Christopher whether it was difficult to have that conversation with his loved ones. He is aware of what goes on in political forums, but his family might not see these threatening exchanges. Hearing that your brother, son or partner has received vile comments might encourage your family to say, ‘get out while you’re ahead’. “I understand that. They are very supportive. They’re there to console when I need them to,” he said.

Christopher says that if he doesn’t get the Brexit outcome his campaign group desires, all of this work will have still been worth it. “It’s opened my eyes to a completely different part of life. Politics is not something that I would have ever considered myself doing before 2016.” And he says that he might consider standing for election as an MP in the future.

His immediate future is outside Shaftesbury. A few days ago, Christopher moved to the town where his long-term girlfriend is starting her university course. He will still remain just as politically involved. “I will know when it’s taking up too much of my time, when my partner says, ‘I need to have a word with you’. Until then, I think I’m probably all right, but it does take up a lot of my time,” said Christopher.