Best In The West Award For Shaftesbury’s BV Dairy

BV Dairy has been named ‘Producer of the Year’ at the Taste of the West Awards.

Managing Director Jim Highnam and Manager Mark Damen received a certificate in front of 420 people in a ceremony at Exeter University earlier this month. Jim told Alfred’s Keri Jones why this recognition matters.

“Taste of the West is a marketing organisation for small and medium sized food and drink manufacturers throughout the southwest of England. It’s long established and they have a series of awards, which recognise different businesses. Some of the awards were for the best hotel, best restaurant, best delicatessen, the best brewed product, the best hot beverage,” explained Jim.

The Producer of the Year award salutes a company in the food and drink market in the southwest. “The judges said that they were particularly impressed by our unique innovation and our business development. They liked the fact that we were investing in products and facilities. They recognise our significant investment in the people in the business in their skills and the ‘up skilling’ of everybody that works here,” said Jim, referring to BV Dairy’s drive to increase staff knowledge, training and expertise.

The judges also appreciated BV Dairy’s investment in automation. “In the food industry, we need people with more skills. We need to do that alongside more automation. Customers demand more products and more consistent products. They are always looking for cheaper products, better value for money. We have to keep developing skills and investing in automation,” said Jim.

The award assessors required both written and verbal presentations. “We had to explain to the judges, in a face-to-face interview, how we think we qualify for that award.” The Wincombe Lane-based business was actually shortlisted for two awards – one was for environmental sustainability and the other one was Producer of the Year. “I did the environmental sustainability interview and presentation and Harry (Cowan) our Commercial Director the Producer of the Year award,” said Jim.

The BV Diary management had no idea that they had been successful in the producer category. “It’s a completely closed envelope. It’s only announced at the presentation lunch. I thought that we had a really good chance on the environmental sustainability award. As it transpired, it was the other way round.” 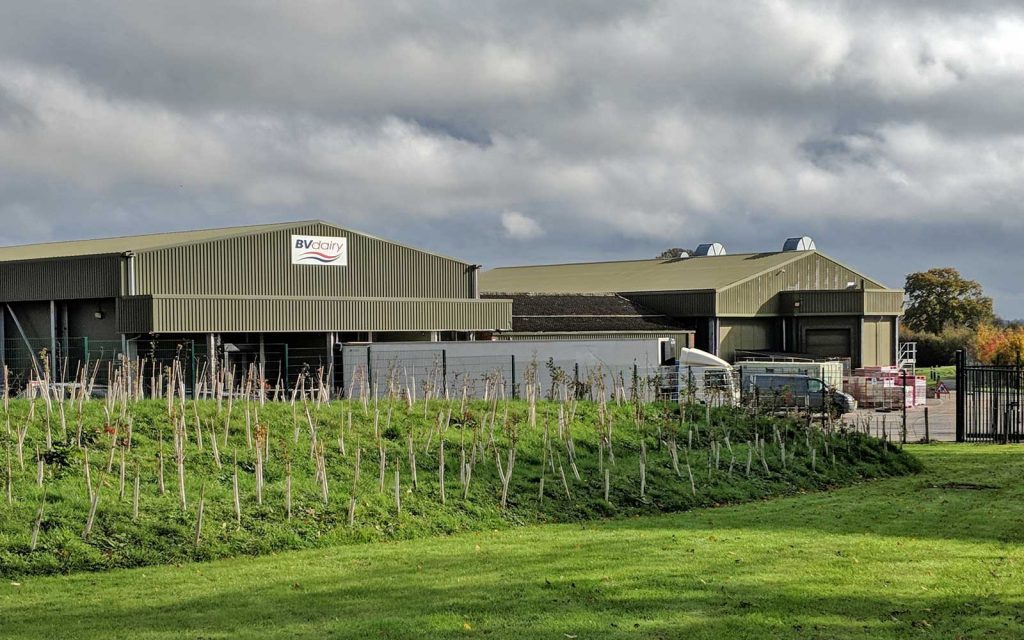 Jim says that the work BV Dairy has undertaken in reducing its environmental impact offers a compelling story. “Our anaerobic digester processes all of our unavoidable liquid wastes and generates electricity from that. We built a chill store in 2016 that was designed to operate with the least resources, so it is the most energy efficient. LED lighting only comes on when there’s some activity in the area. We covered the roof with solar panels and we can generate 20kilowatts of electricity from solar. We’ve got a lot more to do. I think that in a post-Brexit world, and we will get there one day, sustainability is going to be a very important issue for the whole of society and for food and drink manufacturers in particular.”

I could sense Jim’s disappointment at not being recognised for BV Dairy’s herculean sustainability effort. I suggested that another business, doing even more work to become sustainable, could be considered a positive result for everyone. “It was a brewery company that won the award. I’d really like to know what they are doing which impressed the judges more than what we’re doing,” said Jim. We joked that they were possibly giving away beer.

In all seriousness, BV Dairy’s success has been well-received by staff. The company holds an internal conference for employees every six months and they heard the news about the awards success during this event. “Everybody was delighted to hear that we’ve been recognised,” said Jim.

He says that acknowledgement does makes a difference. “We beaver away, day in day out. We operate every day of the year. We just try and do the best that we can internally. It’s fantastic to be recognised externally for the achievements, which might otherwise not get noticed.”

Jim hopes that Shaftesbury will also feel proud of this commendation because the success of this locally-owned business is closely linked to our North Dorset community. “We are buying over £10 million of milk from the local farming community in and around the Blackmore Vale,” said Jim. “A lot of what we do is hidden from local residents because it’s distributed over the whole of the country. We were very pleased to let people know that we are tucked away in Shaftesbury and we are hopefully doing some good things.”